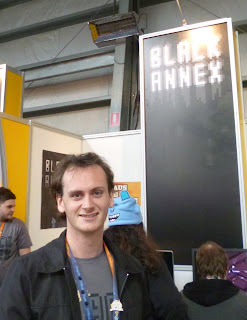 At PAX Australia, Digitally Downloaded’s Sam caught up with Lance McDonald, the man who has somehow managed to build a game engine from scratch using QBASIC while also managing a full time job, with a wife and two kids at home. Lance talked about how important engaging with the player was through gameplay mechanics implemented, creating emotion within the player, being a indie developer in Australia and looking up to other indie studios for inspiration.

I like older games like Theme Hospital where although the game had a cutesy mechanic and cutesy appearance to it, in the background there was an overbearing threat that each decision might run my business into the ground and at the end of the day by running a business this is my job. The theme of those games was that even though I enjoy my job I have to keep thinking about if I’m doing the right thing for my business. I like that, it puts an overbearing threat in every decision you make. In Black Annex if you send in five guys to this mission, then I won’t be able to afford to go to another mission later. I like that management aspect in games, it’s what I grew up with and it appeals to me.

DD: When I played Black Annex I got a lot of XCOM vibes from it. How do you deal with players connecting with agents?
LM: Your agents have perma-death so you’re encourage to kidnap agents in missions. If you run out of agents then you’ll have low level beginner guys that you have to struggle to get through missions. If you have a particular guy that you’ve gotten really high levels of experience and he has a lot of health then he dies, I want the player to regret that and feel a sense of loss. I want the player to feel attached to their characters.

DD: You’ve talk about how Black Annex is a love letter to the games you played. Do you want to create a sense of nostalgia to those who pick up Black Annex?
LM: Yes. I want people my age to sit down and think okay, I get what he’s doing here, I know what he wants me to feel, what games he’s trying to remind me of. But younger players, I want them to make them feel the way I did when I was their age and first played games like this. If I can make someone feel the way I did the first time they sat down and played Syndicate that would be awesome.

DD: One of the more interesting aspects regarding the gameplay is the line of sight mechanic. In most stealth games you can only see what’s in front of you but in Black Annex you can see everything that’s going on. Why did you include this?
LM: I really want to encourage the player to slow down, and really look at the situation to get their head around everything before they put their hand down on the mouse. You suddenly get dropped into a situation and it’s confusing. You have to sit and look and say to yourself; that’s a camera, that’s a guy walking back and forth, that’s a guy with a gun patrolling this room. I wanted to scare the player into thinking “hang on, there’s a lot going here. Step back, think about who you’ve got to control, think about what your options are because if you just run into the situation things are going to go absolutely horrible.”

First players will die a lot, and that’s completely normal but they need to realise that they need to think about what they’re seeing and decide how to approach it sensibly. Or they can just take five guys with gattling guns and kill everyone if they want, but it’s just not maybe the most affordable option as far as the business management side of the game goes.

DD: What is it like being an indie developer in Australia, especially as a man who has built this game entirely by himself as a side project, working a full time job with a wife and two kids?
LM: It’s ridiculously hard. Succeeding is about not letting it affect your life in any negative way that you can possibly control. I needed to sometimes step back and not work on the game at all for a week. And sometimes I’d spend a whole month working on the game until 3am every night. You have to make sure your priorities are right an make sure you make the right decisions. Small indies need to think to themselves “am I doing this because I want to quit my job and live of indie games or am I going to continue to do this as a hobby?” For me it would be a dream to just be making games but it’s probably also not that realistic at the moment. To sum it up finding the right balance and still getting a game made is pretty hard.

DD: How has the community responded to Black Annex?
LM: Here at PAX it’s been absolutely fantastic. It’s the first time the public have been able to play the game at all. It’s only the second time the game has been shown at all. The response has been surprisingly good considering it’s only a very rough alpha, but then again it is at that point where people can sit down, play for five minutes, get their head around the mechanics and what the overall concept is and think, “yep, I like it, I’m looking forward to see more as it goes down the line.” Overall PAX has been a really valuable experience.

DD: Who do you look to as inspiration for when you’re making games?
LM: From my youth looking up to people like Peter Molyneux, back when he was in Bullfrog, though not so much based on what he does now. These days I find myself inspired by Introversion, who made Darwinia, Uplink and now are making Prison Architect. When I played Darwinia I sat down and thought “OK, I think I could make a game too.” I found it amazing that just a couple of guys working on their own could produce that, and I thought I could do something similar.