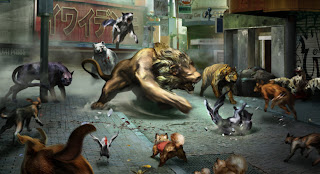 Tokyo Jungle was a weird game. Not just because it is weird (though any game which features psychopathic Pomeranian that can take down a fully grown freaking Tiger is not just weird, it’s downright terrifying), but because it is a game that I really, truly should have loved. But I didn’t. In fact the game failed to click with me at all.

But I was so desperate to give the concept of this game a chance that I just how do download the mobile version. And you know what? This game’s formula is so, so much better suited for mobile platforms. Now I’m a fan.

At its core Tokyo Jungle Mobile is an action roguelike. Players start out with a single animal from a species they select before play. The goal is to firstly find enough food to simply survive. This is easier said that done. Play a carnivore then you’re going to need to track down live prey. Play a herbivore and you’ll need to avoid predators while looking for plants to eat. Both challenges are complicated by the fact that the hunger meter drains very quickly when not eating, food is often scarce, and if that hunger meter runs out then it’s the precious health meter starts dropping quickly. 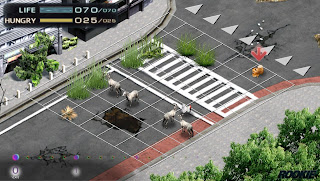 Beyond mere survival though there’s a secondary objective here – animals want some lovin’. You’ll need to track down a couple of specific points to “mark as your territory”, and once a piece of territory is yours a potential mate will appear. Mating will “retire” your character, but he’ll be replaced by a team of offspring, and the cycle starts anew.

This game is fast paced and the challenge steadily scales. In the first couple of chapters the worst animals you’ll be up against is some lumbering crocs (hidden in the sewer, no less…. the developers here have a serious sense of humour). A couple of generations in and FREAKING RAPTORS start showing up. Try surviving a hunting pack of freaking raptors when you’re playing as a baby chicken. I can because I’m awesome, but it’s still pretty tense.

Eventually the odds will become insurmountable and the dynasty will end. At which point you’re given a score based on how you’ve performed, and it’s game over. Yep, this is a “beat the leaderboard” kind of game, and it is hugely effective at it. There’s 40 different animals to play as of all kinds of strengths and weaknesses, and there is nothing more satisfying than tallying up massive scores as a little bunny. It’s a little unfortunate that this game loses the online score sharing that the big console version did, but the fact that it’s portable more than makes up for it.

See, beneath the cheaper visual aesthetic, and ignoring the fact that movement is now grid-based rather than 360-direction, Tokyo Jungle Mobile is the exact same game as the PS3 version’s survival mode. And it works so much better as a mobile game. It’s easy to pick up and play; far more so than it is to sit down for the hour or two sessions that the console game tries to demand people play it for. Because frankly, as much fun as this is as a time waster, it’s still not that great at offering deep, insightful gameplay.