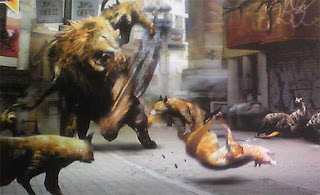 Tokyo Jungle doesn’t necessarily make this obvious, but it’s actually a horror game. When my pack of Pomeranians can tear into a tiger and rip it apart, I’m sure I’m looking into a crystal ball, and my life-long suspicion has borne out true; Pomeranians are evil incarnate.

Of course, I’m fairly certain the only reason the Pomeranian horde was able to tear the tiger to shreds was some glitching, because the tiger didn’t exactly fight back when I set at it, but hey, I’ll take the kill as proof supporting my fear of Pomeranians anyway. The same horde of Pomeranians were slaughtered by an emu soon thereafter, so I guess karma was at work anyway.

Tokyo Jungle is not an AAA-grade game by any means. The actual theme is deeply effective and raises all kinds of environmental issues that I consider a crucial social message that more game developers should be adopting, but the game itself is a very simple and occasionally quite broken roguelike. 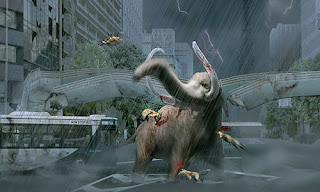 Tokyo has been ruined by some mysterious Armageddon and the humans are gone. The animals have taken over the ruins of the city and the name of the game, literally, is survival. Nature has moved in to start reclaiming the concrete wilderness, so it’s possible to run around and hunt by hiding in the foliage, and there’s nesting areas to claim as your territory and breed in. Hunting for food mirrors the reality of nature – it’s the constant concern for the animals. At the start of each game you’ll be able to either pick a herbivore (like, say, a cute lil’ bunny rabbit) or a carnivore (from the relatively innocent dinosaurs through to the vicious, cruel Pomeranians).

Mechanically though, the only difference between the two animal types is that for carnivores the food tends to run away, while for herbivores, the food is stationary, but it’s much more likely that the animals around you are looking to snack on you. The game does a remarkable job of recreating the realities of nature – the first time I had to kill a rabbit to survive I was rather sad (I have pet rabbits, see). What is not so effective is the actual mechanics of the game. It’s not an easy game (as most roguelikes are challenging), but where Tokyo Jungle fails is in how overly simple the actual mechanics really is. Aside from the hunting there’s not really time to do anything else (the hunger level rises too quickly), and so the only objectives the game offers up is “go here, kill X amount of this.” The complexity of the game doesn’t really grow over time. It gets harder, but you’re doing the same thing over and over again. 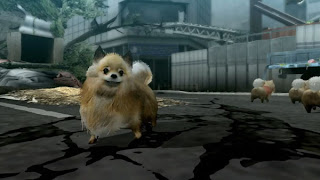 The one piece of gameplay variation is in the poison effects. Every so often one of the areas in the ruined city will become infused with hostile atmosphere that will start a percentage bar increasing. Don’t get out of the area in time and it’s a dead animal. Considering it’s an easy matter of just moving to the next area, though, that doesn’t add much to the experience. The occasional rainstorm or patch of darkness also adds only minimal challenge to the game.

It’s unfortunate that the gameplay is so simplistic because it really ruins the game’s main strength – the sheer variety in animals to unlock and play with. You’ll have only two choices to begin with: a deer or a demon-dog, uh, Pomeranian… but the unlocks happen quickly and soon you’ll have access to the aforementioned dinosaurs, rabbits, mammoths and emus. Given that mechanically speaking they’re all just stronger or weaker versions of the carnivore or herbivore, the actual game content is over far too quickly.

And this leaves me very conflicted about the game. On the one hand I love the message of Tokyo Jungle, as it managed to hit an emotional chord with me that very few games are capable of. But on the other I really, really did not enjoy the actual gameplay, especially considering I have played dozens of better and more creative roguelikes in recent years.

Carmageddon wreaks havoc on the iOS Marketplace on Oct. 17th