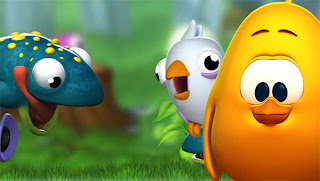 The original Toki Tori was released for the Game Boy Color on Semptember 12th, 2001. During the nearly 12 years that it took for Toki Tori 2 to become a reality, developer Two Tribes spent over half of that time being a game studio dedicated to the creation of games based off of licensed properties. With the rise of digital game distribution in the late 2000s, Two Tribes took a gamble and decided to remake the original Toki Tori for the Nintendo Wii’s WiiWare service. This was the springboard point that allowed the developer to fund its own projects and escape the grip of contracted game development, with its ultimate deceleration of independence seemingly taking the form of Toki Tori 2.
Toki Tori 2 is an ambitious game. It is more-or-less an open-world puzzle game, allowing the player freedom to roam around while playing a game that usually excels when developers exercise complete control to provide puzzles with singular solutions. But no, this game dares to be a little different. As a consequence though there is is potential for players to mess up and find themselves frustrated. The in-game tutorials and all of the story elements hinge on players acknowledging visual cues rather than easily-understandable text. There are only two actions the player can perform (besides walking); whistling and stomping. For many, a game so simple would be hard to imagine and creating something compelling out of us seems like it must be a nightmare to design, but Toki Tori 2 shows that it is not impossible. 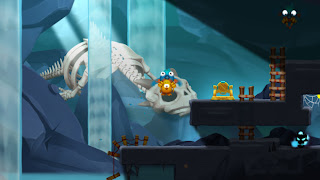 What is better is that Toki Tori 2 manages to be an extremely high-quality product while working within those limitations. The opening of the game is where all the elements are at their peak. After flashing a brief summary of its controls, Toki Tori 2 throws the player into a forest filled with colourful surroundings and animals. Before five minutes can pass, the player has been introduced to a conflict, given a goal, and completed several puzzles all without the use of any on-screen text.

The art assets were crafted with luscious detail, the music evokes the intended mindset with high-quality composition, and the difficulty curve is accurately placed to keep progression from either halting or breezing by the player. This, combined with the open-world element, visually focused narrative, and pace of new puzzle elements learned within the game, gives the player a real sense of adventure in a world that is more fantastical than this dull Earth. Very few games can evoke that sense of adventurism and Toki Tori 2 has been the first game of 2013 which actively engaged my curiosity bone.

However, the major flaw that ends up trapping the game is that it ruins its own pace. Around the four hour mark, the game’s narrative takes a sudden halt as the game sits and waits for players to navigate through to its conclusion. That’s the downside to open-ended gameplay; there’s no guarantees that players are going to progress, especially if it’s puzzle heavy. And there isn’t a clear sense of progression apathy can set in. On top of this, the simple gameplay of Toki Tori 2 doesn’t really do a good job of throwing players with new ways to do things, meaning that both the gameplay progression feels stagnant a very long time.
However, even after that compulsion to explore has gone, Toki Tori 2 is still a worthwhile puzzle game and a very good one at that. The mechanics are fun to play with, the difficulty curve of the game is close to perfect and the later puzzles will really make veterans rake their head in confusion. Accompanied with the always gorgeous artwork and music, it is a solid package and well worth playing.