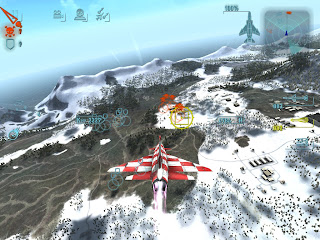 When you cross technical proficiency, a reasonable level of polish, and feature parity to AAA console releases with uninspired design, you get Sky Gamblers: Cold War.

It’s impossible to claim that the game doesn’t give you enough bang for your back; $4.99 gets you a single player mode featuring survival, campaign, dogfight missions, free for all, team deathmatch, capture the flag, defend the base, free flight and last man standing, as well as multiplayer with local WiFi, online, Game Center, and head-to-head play. The game is pretty to look at, too, with gorgeous sunsets and beautifully-rendered oceans being par for the course.

So why is it so uninspired? For starters, the controls are simply not very intuitive. There are plenty of tutorials and multiple control schemes, but they did not do much to alleviate my initial discomfort. After a bit of practice I improved and was able to play the game more confidently, but there was still a nagging feeling that I never was able to master my aircraft, and I continued to have trouble steering throughout. 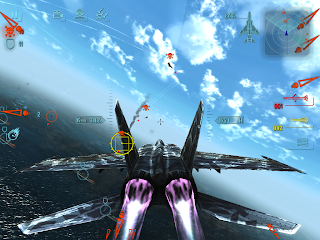 Once I was able to get past the difficulty of the controls, I found that there is certainly some fun to be had with Sky Gamblers. The campaign missions are reasonably engaging, despite the barely-there story and hackneyed ambushes that are supposed to be surprising. Once that “story” got out of the way and I was tasked with blowing up enemy aircraft, the game got fun. Locking onto a plane and blasting it to pieces with missiles is satisfying, if repetitive, and I found the missions to be well-paced.

Sky Gamblers is less successful when it deviates from dogfighting to other forms of gameplay. I understand why the variety seemed necessary to the developer, as there are only so many ways to shoot down planes, but they should have ensured that all gameplay elements were equally entertaining.

One example of this is an early mission wherein the player takes on the role of a door gunner on a helicopter and must eliminate targets on the ground to escort a rescue team to safety. It sounds like a fun diversion on paper, but what it amounts to in practice is a poorly executed on-rails shooter. Luckily, while they do leave a sour taste, thanks to the wealth of content, failed experiments like this are the exception to the norm. 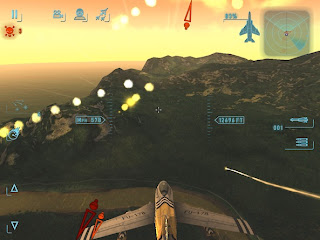 One additional feature of note is AirPlay support via Apple TV, which means the game can utilize a TV screen for what should theoretically be an enhanced gameplay experience. However, in my testing playing the game with AirPlay was a bit of a mess. The tutorials, for instance, become virtually unplayable without the ability to tap through written onscreen prompts. The gameplay is pushed to the TV while most of the UI remains on the iPad, but for some reason the prompts are missing. I was both confused and frustrated by this glitch and permanently switched back to playing solely on the iPad.

I wanted to like Sky Gamblers more than I ultimately did. In the end I felt like for all its modes and multiplayer features I had seen all the game had to offer in a relatively short amount of time, and the lack of successful gameplay variety ultimately held it back from being a more compelling experience. If it’s mobile dogfighting you’re looking for, this game has all that and more, and it’s pretty fun to boot. Sadly, it lacks that extra level of polish and interesting level design to truly push it into the realm of a must-have game. It’s a great showcase for what the iPad can do, proving that once those control issues are resolved, it has no trouble replicating a console quality experience. Sky Gamblers: Cold War does not change the face of mobile gaming, nor does it deliver a truly entertaining experience.