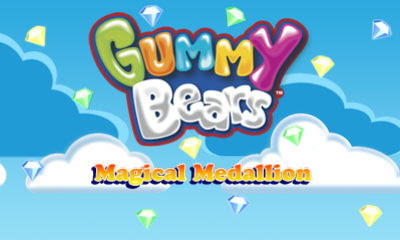 Gummy Bears Magical Medallion is clearly aimed at a younger audience, which is fitting for the younger 3DS gamers. As a cheap low budget title aimed at kids, it’s not terribly unexpected to find a few shortcomings scattered about, though it’s disappointing that the industry continues to expect children to love products adults would never touch.

That said the only thing magical found in this title is the Gummy Bears license – even fans need to stay away.

The barebones storyline finds King Sour Berry taking off with the magical medallion and it’s up to a purple Gummy Bear to get it back. This sets you off on what is supposed to be a classic platforming adventure and in some ways it is. The platforming basics are present and accounted for: jumping on enemies, jumping over obstacles and chasms, and bouncing on things to get to higher places are all here. Sadly, just because the basics are on offer doesn’t make this a classic title. 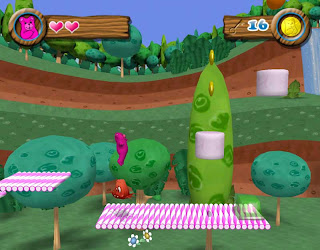 Uninspired level design, bland graphics and poor controls find the game repetitious and frustrating within a few short levels. Worse, is that background elements can oftentimes cause instant death scenarios, which is a confusing thing to find in a title that is clearly aimed at a younger audience. It doesn’t stop there either. While the controls are stiff by default, there are times where they become completely unresponsive, particularly when jumping. When you can’t trust the controls in a platformer – there’s a reason to be sour.

The implementation of the 3D effect is by far the worst misfortune of this title. I’m not one to turn the 3D effect off on my 3DS and have had very little issues with it in the past. I can’t put my finger on it exactly, but for some reason, playing Magical Medallion with the 3D effect on makes me seriously nauseated. It seems as if the images don’t line up correctly for some reason.

It’s hard to write a review and have little to nothing good to say about it – it isn’t something that I prefer to do. But as a critic, it’s my job to give honest advice and I honestly cannot recommend this title to anyone – not even Gummy Bears fans. There are far too many acclaimed platforming titles on the 3DS eShop – many suitable for younger gamers – to justify purchasing this game.

Drakengard 3 screens, art and a trailer you say? Do tell…