Sonic the Hedgehog for the Game Gear was a legitimately solid title that, while flawed in several regards, still managed to establish itself as a viable alternative to the Mega Drive release. It was an even more impressive effort considering the game was not developed by Sonic Team but by newcomer Ancient on vastly inferior hardware. With the Game Gear adaptation of Sonic the Hedgehog 2 though, Sega deemed it fit to assign a new developer to the handheld series – Aspect.

The result of switching developers so hastily seems to show. Aspect’s title brings little new to the Sonic formula, with the blue dude lacking his spin-dash manoeuvre and Tails as a playable character. Instead, it plays as more of a reinterpretation of the first game.
This would be perfectly acceptable if the very first zone was not utterly gruesome. You’ll have to contend with innumerable leaps of faith caused by the lack of consideration for the Game Gear’s limited screen size. There are even sadistic segments that force the player to send Sonic to a fiery demise if they lack the omnipotence to instantaneously predict the timing of an unseen jump. The initial levels also showcase the sloppier controls and level design that, even if it functioned properly, would be inferior to its predecessor (let alone its Mega Drive cousin). It’s all based around the expectation that the player will want to memorise obtuse design choices.
The second zone fares no better, delivering the same batch of trickery whilst introducing the player to glitches and bizarre inconsistencies. It also solidifies the player’s assumption that levels will rely on flow-hindering gimmicks. Indeed, Sonic ends up using such devices as mine carts and hang gliders that, while tolerable in small doses, end up overstaying their welcome and subsequently hamper the experience. The hang glider in particular has less than intuitive controls and the others invariably induce more suffering than the variety warrants. Had the level designs been solid (as well as their controls), they might have actually been beneficial. 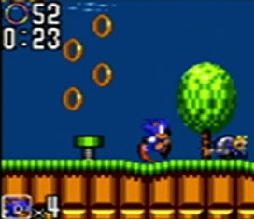 The boss battles range from being entertainingly dexterous bouts to frustratingly mundane. A fair portion of that aggravation lies not in their design (as a couple could be respectable foes) but once again in the Game Gear’s screen size. Like the original Sonic the Hedgehog though, the stages present no rings with which to equip yourself, meaning the tougher battles are all the more so. The boss stages also tend to have particularly malicious segments preceding them, so just arriving there may be a skirmish in itself.
Games such as Mega Man that require learning from trial and error are able to be successful based on their clever balance of skill and generally polished design. They also grant the player incentive to replay levels thanks to unlimited continues. Thus, the need for memorisation can be forgiven in circumstances where the player is actually given an opportunity to learn.
That approach is completely ill-suited to the philosophy of the Sonic platformers, unfortunately. Sonic 2 does not require any real skill beyond memorisation and perhaps basic motor abilities, nor is its design polished in any sense of the word. It’s also devoid of unlimited continues, meaning anyone playing the game legitimately will quite probably need to make return visits through the same broken beginning levels ad naseum. It bears mentioning that standard 3DS save points can be used, but they shouldn’t be near-mandatory to salvage sloppily crafted levels.
In some effort to truly outdo themselves, the developers managed to incorporate substantial plot holes into a game that has virtually no dialogue. Here’s an excerpt from the game’s digital instruction manual:

Dr. Eggman (a.k.a. Dr. Robotnik) is back, and he’s captured all of the animals on the island! He is holding me in a place called the Crystal Egg. In order to free me, you have to find and bring the six Chaos Emeralds. Dr. Eggman made me write this. He says he’s waiting for you, and he’s created six really nasty robots in order to ‘get rid of you once and for all.’ I don’t know what he has planned, but Sonic, please be careful!

Let’s disregard that Tails says he doesn’t know what Eggman has planned directly after offering a fairly meticulous explanation of what his scheme is. Sonic is supposedly reading this letter in the comfort of his home. In the game’s opening cutscene, however, he witnesses the capture of Tails firsthand and the blue hero immediately sets out to rescue him. Regardless of which scenario is canonical, the sequences between levels consistently depict him adventuring with Sonic, which would be quite tricky to accomplish within this alleged Crystal Egg. The villainous Eggman also goes on to rescue Sonic from certain doom and raze one of his very own robots with literally no input from Sonic. How’s that for revenge?
It may sound inane to critique the plot of a straightforward platformer, but the amount of effort applied to Sonic 2’s story and its gameplay often feels comparable. In both cases, Aspect manages to take a mundane concept and unnecessarily complicate it whilst botching the essentials along the way.

To be fair, the game is not entirely meritless. The 8-bit visuals hold up reasonably well, as do many of the better chiptune melodies. While the sense of speed is inferior to its forerunner, it at least seems to operate more smoothly. It’s regrettable that these details are pointless since the core experience is so broken.

Sonic the Hedgehog 2 (for the Game Gear, I hasten to add) is one of the lowest points in the franchise’s history. Thankfully, Aspect would go on to produce improved instalments such as Sonic Triple Trouble that, despite having some of the same issues, are far more palatable. Even if you’re a hedgehog aficionado, just about every other Sonic game on the eShop surpasses this rushed sequel, rendering it irrelevant.