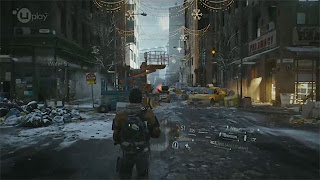 Ubisoft’s presentation was filled with stuff we had already seen plenty of before. We know what to expect with Watch Dogs and Assassin’s Creed, and we know there’s a Just Dance game on the way. They are exciting games, but not edge-of-the-seat stuff.

Then, right at the end of the show we got a look at Tom Clancy’s The Division. Wowzers. An open world shooter with MMO elements, and all kinds of interesting social features, The Division is a strong contender for the most exciting game we’re going to see this entire conference.

It’s something of a kitchen sink of a game. In addition to the full suite of online services, PVP and PVE that you would expect from an MMO, and in addition to some standard third-person cover-based shooting action is an interesting looking skills system that, in the brief gameplay footage we saw, looks quite in-depth and opening up lots of customisation options.

In addition to being able to play online with friends via consoles, other friends who might not be at home can skill join in. Yep, there’s iPad integration. We don’t know how deep that will go, but in the footage we saw, a players on an iPad joined in a skirmish using a airborne drone to help clear out some undercover enemies.

Mobile integration is a common theme already in this year’s E3, with Microsoft making a big deal of Smart Glass, and numerous other Ubisoft and EA games taking advantage of all this Cloud technology to allow people to interact with their favourite games even when they’re not in front of the TV. As a fan of the iPad itself I like the potential here to be able to engage with my console games from anywhere, and The Division, on paper, sounds like it could be the best example of this in action yet.

The game has an interesting premise too, if a bit of a cliche – there’s a virus that has devastated America and rendered the entire country lawless, and now people are fighting over the remaining scraps to survive. This is a compelling cliche because it tells a very human story, as we’ve just recently seen with The Last Of Us. The issue that this game will face from a narrative point of view is that the more you introduce real humans into the experience the harder it becomes to maintain an intense atmosphere. Too many people playing bad rap music through the speakers to piss everyone else off.

That minor concern aside The Division is one of the few “MMO”-style games that I’ve been genuinely interested in for quite some time. Well done, Ubisoft.

Some Killer (is Dead) Screenshots