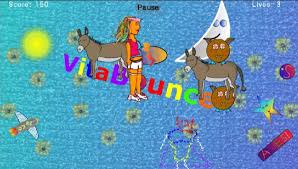 I don’t really know how to review VitaBounce, but it’s a very special game. It stands as a testament to what happens when people get on the industrial strength hallucinogens. It is by far the most memorable game in the entire games industry – what I’ve seen to review this game is forever burned into my brain.

I only played the game once for fear that any longer and I will be inspired to join a cult or something; I wouldn’t be surprised to find subliminal recruitment going on here. I will never go back to it, but I feel like I’ve done a great thing by playing this game. As a gamer, and as a critic, I’ve been through the looking glass and into a world of dementia, and now I can appreciate games that are worth playing all the more.

So, VitaBounce. It’s a little Breakout style game featuring a ball bouncing around a playing field. Players have a paddle at the bottom that they use to keep the ball in play. Three lives lost and it’s game over. So far it all sounds like decent enough fun, right? As long as Breakout is cloned well it’s an entertaining way to pass some time.

Thing is, the bricks typical to breakout are, in this game, replaced with donkeys and weird girl sprites that float from one side of the playing field to the other. Some move fast, some slow. Players get points for hitting them with the ball. They are not animated. The physics engine is straight from GameMaker’s tutorial. It’s not unplayable, but it’s the most amateur game you could possibly imagine.

It gets “better”, too – the entire playing environment looks like a bad LSD trip, but that’s not even the most… creative… thing about this game. Rather than even try and describe the music, here’s the “game over” track:

Interview: American McGee on the Wii U, PS4 and Durango vs mobile, Kickstarter and a third dark Alice adventure