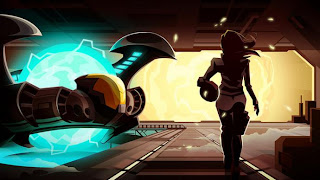 Space seems to be the latest craze for the pick-up-and-play style games, but rarely do games have that “just one more go” magic that will see you up and playing the game until the next morning dawns.

Velocity Ultra is a vertical scrolling space shooter that is faced-paced and stress-inducing. It was originally released for Playstation systems as a mini, but now it has a Vita remake and it’s done a good job at making the jump. Each level is over in around about a minute but, and this is the case for many of the later levels, you will be spending a lot longer trying to perfect the levels.

Every level requires you to get a high enough score to gain enough experience points to unlock later levels. You gain points by completing levels quickly and by rescuing as many survivors as you can. The levels start of simple as a linear path to travel through but later, there is more than one way to get to the end.

There are many gameplay elements that are slowly introduced and together they create a really well-crafted formula. Holding down the R button will scroll the screen faster than normal, speeding through the level. Tapping on the touchscreen will teleport you to where you tapped, allowing you to travel through walls to collect survivors originally out of reach. Whilst the right stick throws bombs, and can attack in all directions opposed to your lasers that can only shoot forward. 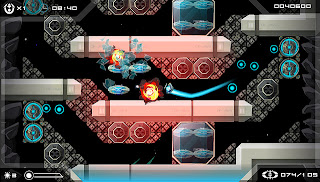 Velocity Ultra gets very challenging, but that’s more due to the poor explanation rather than the levels themselves. I’m not sure if I missed something, but it got to a stage where I was constantly running into dead ends. Unbeknownst to be I was meant to be setting up teleports so I could go back in the stage. Once I had figured out for myself what I was meant to do it allowed for me to find greater enjoyment in these challenging levels, but it would have been nice to have a clearer explanation of what is going on.

The game visually is stunning on the Vita screen. Even when there is a lot of action on the screen nothing gets lost, you know where you are and where your enemies are. It would have been nice though to see some diversity in the levels themselves, though. Most of the levels look exactly the same as the ones that come before them, and the audio is a mixed bag. It’s great to listen to but it doesn’t fit the intensity of the levels.

There’s a lot of content in Velocity Ultra. With 50 levels to progress through, there are also separate missions that range from getting through a level without touching the walls to eating ships. Leaderboards are present also for extra longevity.

Velocity Ultra is a great game for the Vita system. You tell yourself you will play for five minutes then 20 minutes later you’re deep into the game. Not only is it addictive but there is great gameplay as well. It’s great at what it does even it if it a little limited in the long run, but really, that’s just what you want from a small title.