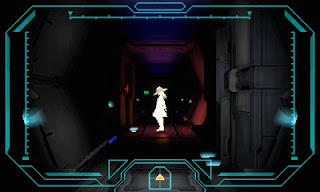 The Starship Damrey kicks off with a promise that it will not tell you how to play it. We’re explicitly told as players that that game is not going to guide us; no tutorials, no guides, no glitter on the floor pointing us to the next destination. Within the small and claustrophobic confines of this dark spaceship we’re going to be left alone to figure out our own path through the plot.

It’s a tantalising promise that this game is a throwback to the old-school text adventure games where every step through the game is a sense of wonder and achievement. And Damrey does achieve an intriguing setting with puzzles that are often quite challenging. So why, oh why, can I just not love this game?

I honestly can’t nail it down. The game’s aesthetics are pleasingly dark and intense. The puzzles, as I said before are intriguing, and figuring them out did provide me with a nice sense of progression. And the game lives up to its promises – there are no tutorials in Starship Damrey, just a few well-placed and well-integrated hints nudging people in the right direction. 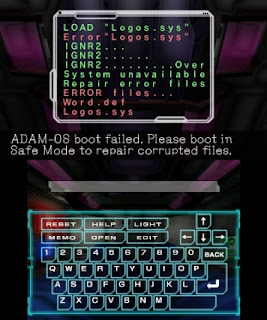 Most compellingly is the horror theme that runs through the game. We’re talking the kind of little ghost girls and darkened hallways kind of horror that even though there’s no real threat to the character’s life and well-being (considering the player’s character is a robot ans all) is at threat, it still manages to be creepy. Heck, the game keeps reminding people not to be scared – the actual player is shown on the bottom screen, locked safely in an inescapable room and controlling the events of the game through the aforementioned robots. Perhaps that’s what the developer was looking to point out with this game – horror is possible, even when you’re as disassociated with what is going on as possible.

But for all that wonderful atmosphere there are problems with this game that almost stand as proof that the adventure game no longer works with modern expectations in game design. For instance I have fond memories of adventure games of old having me backtrack half the way back to the start of the start of the game to figure out puzzles. It sounds counter-intuitive to good game design, but that backtracking lent those classics a sense of freedom of exploration; a game like Myst literally required players to explore in order to succeed. But the Starship Damrey doesn’t require this. Progression in this game follows a far more linear path where in most cases the puzzles are localised to a single room. Figure it out and the path to the next room is unlocked. As a consequence the game feels less labyrinthine (and so less engaging) compared to some of its older peers. 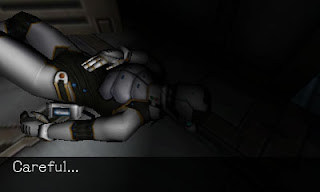 The puzzles too are less intricate than I would like. Virtue’s Last Reward, for instance, is a breathtaking example of multi-layered puzzles and the game requires deep logical thought as a consequence. The Starship Damrey’s puzzles require a few fewer steps to reach the conclusion than a game like Virtue’s Last Reward, and as a result, even with that lack of hand-holding, this game makes it feel like it’s projecting the solutions to the puzzles for the player a little too easily.

Given that the puzzles are all there is to this game, then it’s difficult to consider this a highlight of the genre, and frankly as the Level-5 “Guild” games (such as Liberation Maiden, Crimson Shroud and Aero Porter), this feels like a significant step back in terms of both originality and execution. The Starship Damrey is an enjoyable game, but for an adventure game it’s not quite the special experience we might have hoped for.

A quick note: I’m on a podcast, going on about otaku things