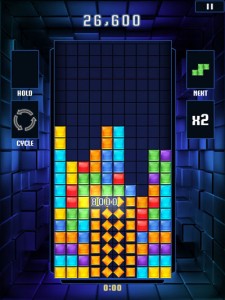 Tetris Blitz is everything that is wrong with freemium gaming boiled down into one exploitative little game that bears the Tetris name, but contains none of the Tetris gameplay.

Here is a game that has taken a formula so addictive and perfect that nothing needed to be done to it to sell millions of copies. Developers can quite legitimately stick the exact same game that we’ve been playing since the Game Boy and NES and people will still buy it on their new platforms. I’m sure there would even be ways to make that exact game free to play and throw in some monetisation options, like an online leaderboard with items to boost scores that players can pay money to unlock early. We’ve seen that before, and it works even if the more entitled amongst the gaming community complain about it.

So why-oh-why make this travesty? As the name suggests it’s a play on the Bejewelled Blitz formula where players will have just two minutes to register as many points on the social leaderboards as possible. Makes sense from a business perspective, I guess – you’re more like to weasel money out of someone when their game only lasts two minutes as opposed to half an hour. 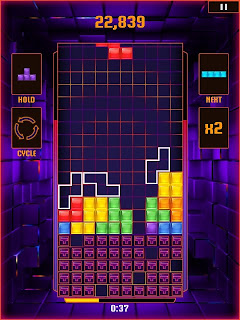 But in this effort to shove a square peg through a triangle hole, the developers behind the game have misunderstood what makes Tetris great. Yes, getting a high score has been part of that thrill, but this is a game with its roots in entertaining mathematics – the feature that has turned Tetris into an obsessive compulsive player’s nightmare is the control that it gives to players. Lining up the neat lines of blocks and then dispelling them to blocky heaven with those gold ‘straight’ blocks is the appeal of Tetris. In fact, that’s why it’s a game that’s as testing on the brain as the fingers, and in turn why it’s so perfect.

But Tetris Blitz strips all of that control away and players are tested on nothing more than their reaction speed. With each new piece they’re presented with a couple of places where it can be dropped. They tap that place and the piece appears in its spot. That’s it. Want to place it somewhere that the game decides it doesn’t want you to place it? Tough. With only two minutes to get points together, this structure was necessary to keep the action flowing thick and fast, and it works in that sense. Getting a high score in Tetris Blitz requires some incredible reaction times, much like it did for its predecessor, Bejewelled Blitz. And there is a certain rhythm to the point scoring once you get the blocks flowing down thick and fast. But there’s a critical difference.

It makes sense, but it lacks soul and there’s nothing about this game that remotely reminds me of Tetris. Throw in some very aggressive monetisation models that demand people shell out if they want to really enjoy their time with the game and Tetris Blitz starts to look and feel like a travesty. It’s possible to cleverly modernise classic games in a way that better appeals to modern audiences while not offending the original fans of the games. Tetris Blitz fails on both counts.

Kickstarter profile: Son of Nor by Still-Alive Studios