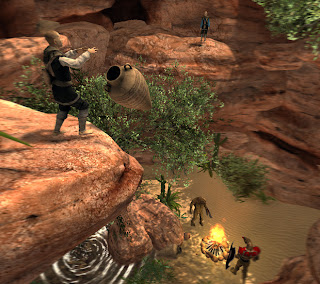 It’s no secret that Kickstarter has been finding itself an increasing amount of recognition within the games media as of recent. Why is this, you might wonder? It’s simple: it’s a platform where any aspiring ideas person can directly “sell” to the community. Whether this effort proves successful for them or not (and it usually doesn’t) is an entirely different story, but the fact remains that Kickstarter is a colossal game-changer for many concerning the traditional funding and publication routes in the industry.

With this in mind, we’ve decided that on a irregular basis we’re going to highlight interesting projects and chat with their creators. One such person we were able to talk to recently was Julian Mautner, founder and lead developer of Still-Alive Studios, an Austrian-based indie development studio. During our discussion, we were able to learn more about the studio’s latest game in development, Son of Nor, as well as how it aims to diverge from the typical philosophies surrounding most games of its calibre.

Son of Nor is an action-adventure game set in the dynamic desert world of Noshrac, and introduces players to an environment that is virtually completely subject to their aptitude. By way of natural telekinetic and terraforming abilities, players are able to uniquely shape the world to their desire as well as make use of various spell combinations strategically to achieve success.

Interestingly, Son of Nor does very little to adhere to what we are often used to seeing when it comes to weaponry in games of its kind – one might even say these standards come to be primeval compared to the innovation that the game shows in other aspects of its design. Mautner said that most of this inspiration came from a yearning for a sense of liberty that is largely absent in games we often see today: “Our main objective is to make the players feel free and like they are really part of this world. The world is not just a pretty hallway to look at; it is your source of power, your source of ammo, your cover, your friend.”

Mautner also conveyed how much of the game’s novelty is intended to lie in its potential for experimentation. “The physics of the world will make players wonder, ‘what happens if I do this?’ or ‘can I do that?’ The best part is when they discover that the answer is yes!” This is a concept the development team firmly believes many players will dive right into – be it out of curiosity or desperation, players will be habitually motivated to try new things during the course of the game’s play.

Nonetheless, affording players this level of interaction has proven to be particularly challenging during development. “The most challenging part would be the balancing,” Mautner said. While a major part of the game’s outset lies in the profound sense of control the player is granted, the studio equally believes some limits ought to remain in place.

“There should be a balance on what players can do in certain areas according to what they have available in the environment. We have to find the sweet spot between overpowering and frustrating the player, so the only end result is enjoyment and amazement. This proves tough since trying to predict player behaviour in a game with so many possibilities is quite hard,” he added.

“Balancing the ups and down of player’s emotions through combat and puzzle-solving is quite important, it let us create a more enjoyable experience that is not just a straight line, it lets us play with expectations and surprise the player. Imagine it all was pure nonsensical action, for sure the player would soon turn insensitive to it making the game quite boring.”

Not only has Son of Nor been designed to give players as much freedom as creatively possible but the game’s versatile style of play is also intended to lend itself to a key aspect of the experience in modern games: co-operative multiplayer. This aspect was an important factor to consider during conception as well as the course of progression during development, Mautner claimed. “We have created mechanics that expand organically when playing in co-op. These mechanics expand in the way the players use their power together.” 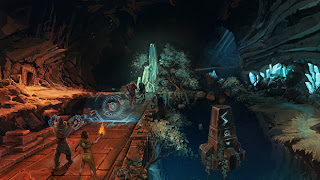 He goes on to give us some insight into how much thought was invested into bringing attention to the precedence of co-op multiplayer in certain scenarios. “For example: one player can levitate a bunch of objects together and another player will be able to use mass telekinesis on them to use them as short-range unlimited ammo. This is something that wouldn’t be possible in single-player, since one player cannot affect its own levitated objects unless they stop levitating it.”

Co-op is something notoriously difficult to get right. It’s not just about throwing more enemies at players as their team’s numbers swell – a good co-op experience needs to ask players to genuinely work together to overcome difficult challenges. It’s something we’ve seen some effort from the big studios in games like Gears of War or Fuse, but rarely do we see multiplayer modes that get teamwork right.

“We want this game to be enjoyable both in single-player and co-op mode, that’s why we are building the game to make it so, we believe it is pretty important to not push the player into just one mode just because the other is boring. But we are also a group that are quite fond of multiplayer games and team play.”

All in all, it’s clear that the collaborative minds behind Still-Alive Studios are intent on one thing: to produce a game that re-creates a number of vital elements we seem to have lost touch with in the forefront of gaming. With an unbridled focus on player interaction and immersion, Son of Nor is shaping itself out to be not only a game, but an unfiltered message to the majority of interactive entertainment we see today.

At the time of writing, Son of Nor has is still a little short of its goal, and just the one day left to make your pledge. If co-op and immersion is your thing, be sure to drop by the Kickstarter to vote with your wallet.