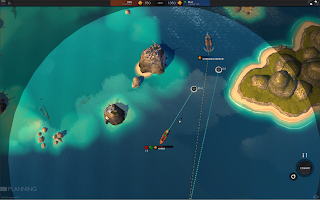 When I was a child, my father and I would play Battleship on the weekends religiously. It was an addictive board game and it felt different every time we played. Unlike the board games, strategy video games have never had the sheer amount of replayability, accessibility, and simple enjoyment that my father and I were able to share. Leviathan Wars is no exception.

Leviathan Wars’ basic gameplay is complimented with brain-numbingly tedious battle cycles. Every turn you’re given a chance of selecting what weaponry you seek fit, equipping a shield or other helpful tool, and then you press a play button to watch it all take its course. Ten seconds at a time. Every mission felt either too brief or unbearably lengthy, especially whenever I failed a mission thus having to restart. I’m not sure why there’s no checkpoints halfway through missions as this was upsetting trying to overcome the last few levels. It feels like there is no substance here and the game’s strategy turns into a trial-and-error process – only if you’re playing offline, of course. The objectives feel cliche and the lack of set pieces make this apparent.

The one enjoyable aspect of Leviathan Wars is its multiplayer. As dull as the offline can be is, the multiplayer allows multiple games to be played at once which omits waiting and will always have you engaging in the action. I wasn’t good at it in the slightest, but there’s something magical when it comes to playing a battleship game – whether it’s a video game or not – with other people. You could call this Leviathan Wars’ saving grace. 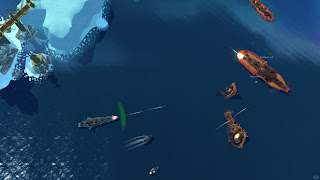 On a technical level the most obvious of all faults in Leviathan Wars are its archaic menus. For the first few minutes after starting it up, I was overwhelmed by its outdated, clustered design. Even after completing the offline, I find myself still overwhelmed by the menus and hope to see improvements in future patches.

The other aesthetic elements were functional, if not especially engaging. I never felt compelled that this world existed nor was there any motivation to ever visit again. As soon as I finished the offline, I jumped online with no regrets. Maybe it was the lack of a decent score or maybe it was the void emotion from the visuals.

When it comes down to it, Leviathan Wars isn’t a game for everyone. If you’re a hardcore strategy fan with free time, sure, but for the more casual fans of the classic game of battleships, you’re better off looking elsewhere.

Review: Monaco: What’s Yours Is Mine (PC)