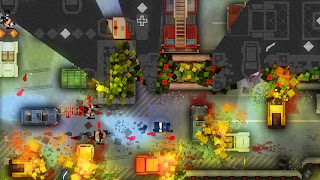 I’ve always had mixed feelings about stealth games. While I love them, it’s hard to ignore the glaring issues that plague most games within the genre, particularly, the problem with losing. If you’ve played a Metal Gear or Splinter Cell game, you’ll know the feeling of having a well-thought-out plan come crashing down when you come into a guard’s line of sight, or when you turn a corner and accidentally run through a laser sensor. All too often stealth games require absolute precision in planning and execution, to the point where newcomers or less invested players no longer find the genre enjoyable.

And this is why Monaco: What’s Yours Is Mine succeeds. While stealth fans can sink their teeth into all the mechanics the game has to offer, there’s just as much fun to be had when you’re running around, guards on your tail, alarms blaring, and shots firing all around you. It’s been a few years in development, but this indie title has blossomed into a full-blown adventure, complete with numerous characters, stages, and skills to master, making it well worth the wait. 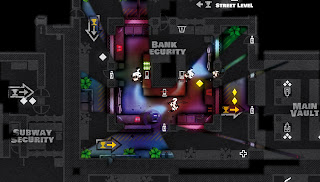 There are eight characters total in Monaco, but only four are available from the get-go. The Locksmith (who can pick locks and safes faster), the Cleaner (who can knock out unsuspecting enemies with chloroform), the Lookout (who can see enemy guards through walls), and the Pickpocket (whose monkey can steal coins for you) form your starting crew, while the Gentleman (who can disguise himself), the Mole (who can dig through walls), the Redhead (whose sultry looks can distract guards) and the Hacker (who can set up traps and viruses via electrical outlets) will join your team as you progress through the main story.

Every level in Monaco can be completed solo, and the game does a good job of suggesting characters for each level. While some characters don’t prove as effective when going solo (I’m looking at you Pickpocket), there are certainly benefits to each character when playing multiplayer, and some characters play off each other’s strengths and weaknesses. For example, the Mole’s loud tools can easily attract guards, but working in tandem with the Lookout to see who might be lurking behind a destructible wall proves useful when trying to cut through the sides of buildings. 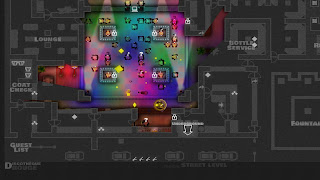 Regardless of who you end up playing as, the goals of Monaco’s devious character change over time, but for the most part, almost every level revolves around breaking into a heavily guarded building, stealing something or breaking someone out, and getting out. Cops, guard dogs, civilians, laser sensors, locked doors, cameras, and pretty much every other security device you can think of have to be navigated in order to complete a mission. As a side goal, you’ll also be tasked with collecting as many coins as you can, which are scattered throughout each stage, usually found resting right in front of a security measure or two.

While this might go against most people’s sensibilities, it’s in your best interests to fully accept the fact that you will get caught in Monaco. While it’s possible that the most ardent of players may be able to traipse through entire levels without ever being spotted by a guard or triggering a laser trap, chances are you will get caught more than once. While other games might punish you with lengthy “alarm phases” or instant death/failure, getting caught doesn’t really affect you a whole lot here. When playing by yourself, getting detected really only means that you need to quickly duck into an air vent or behind a nearby hedge. Enemies present a challenge through sheer numbers rather than individual intelligence, so unless you alert every single guard on a floor, it’s never that much of a challenge to hide for a few seconds until things die down. 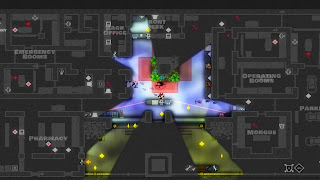 Multiplayer is a bit of a different story. With the option to play with up to four people, it pays to have a plan, even if it’s as simple as divvying up sections of a floor to best cover more ground. Of course, even the best laid plans go awry, and when things go wrong, hilarity often ensues. As disastrous as it can sometimes be to see a teammate get caught, it’s even funnier to watch them run around on screen, attempting to figure out where to go all while being chased by guards. Granted, navigating each level is trickier than it sounds, thanks in part to the game’s visual style. Levels are shown from a birds-eye view, and you can only see areas in your character’s field of view. Darkened areas are sketched as floorplans, and unless something is in your direct line of sight, you’ll have to contend with diagrams of where walls and traps lie.

Even with the added danger of having multiple people roaming a level, multiplayer does have its upsides. While collecting coins does lower your overall time on the leaderboards, you’ll have to collect every coin in each level to unlock extra stages. While this is easy enough to pull off in the first half of the game, the second set of levels ramp up in difficulty, and the extra set of hands proves to be invaluable. Each level usually has a set of tools for you to use, from smoke bombs and portable EMPs, to shotguns and silent crossbows. Ammo/usage is tied to coins, so you won’t be able to simply shoot your way through every level. Playing in groups also pays off in regards to weaponry, since some levels will provide multiple tools to use, but each player can only use one tool at a time. Working in pairs becomes a viable strategy, with one player taking control of a deadly weapon, while another being in charge of a distraction tool. Players can also revive each other if need be, while playing solo will force you to take the role of another character (use up four characters, and you have to completely restart the level).

The story is charmingly told, with the thieves exchanging bits of dialogue before each heist. What starts out as a simple prison escape soon evolves into a series of break-ins and breakouts, as you and your unsavory group attempt to make off with vast riches and escape from the affluent city-state of Monaco. The dialogue will elicit a few laughs, and pay homage to the classic crime movie classics. Admittedly, the game’s soundtrack is the standout, with a piano-laden soundtrack courtesy of Austin Wintory. The music’s tempo increases and decreases to match the level of chaos on screen, and it’s jaunty ragtime feel is reminiscent of classic silent films. The game’s visual palette has some good looking pixel art, though it can become a bit muddy when the screen becomes littered with characters, treasure, and a handful of other icons.

While I was somewhat put off with Monaco as the difficulty spiked and the later missions devolved into tedious trial-and-error, on the whole, Monaco: What’s Yours Is Mine is a sheer delight. While it might not cater to the solo player, when enjoyed alongside a group of friends, it can be incredibly fun.