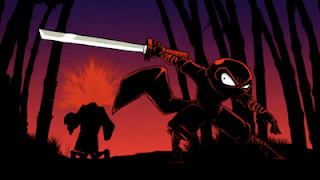 Here’s the danger with Sony’s strategy of throwing so much energy and resources at indie developers; on the one hand the strategy produces some incredible experiences (like Retro City Rampage) and it keeps a steady stream of games coming to the PlayStation Vita while the big publishers refuse to support it.

On the other hand sometimes those resources go to games like Draw Slasher.

What a terrible games this is. The game contains Zombie Monkey Pirates as the primary enemies, for a start. I know that is meant to be a pass at humour, but really. Children find this stuff funny. It stops being funny (or cool, or awesome, or whatever other positive word you want to attach to it) at some point after the age of ten. The Vita is the wrong kind of platform for that kind of game. No ten year old would dare go near my Vita.

Beneath that juvenile idea is some admittedly nice visuals. The Ninja fellow moves around the screen slickly and the enemy sprites are nicely detailed (for… Zombie Monkey Pirates). The game is also capable of throwing a nice horde of enemies at the player at once and the action can ramp up nicely as a result. The backgrounds are pretty. 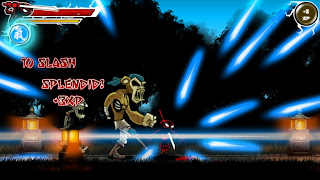 Beneath that is shockingly one-note action. Players swipe on the screen, the Ninja attacks across that line. There’s no button controls, and aside from an energy bar that is just a couple of experience levels away from beings effectively limitless, there’s no real restrictions stopping the player from swiping at the screen like a child with a crayon at a colouring book.

Yes, sure, there’s enemies like monkeys in barrels (hahahahahaha…. ha) which require players have a dash of timing and control. The bosses require players to figure out some very basic patterns and weaknesses. Hooray.

There’s challenge modes and leaderboards, and that would be great, but the game itself needed to be fun first. It’s not. Draw Slasher manages to be both trying far too hard (to make players laugh) and not trying nearly hard enough (to create a compelling game that people want to play).

Go play Thomas Was Alone instead, and show Sony that as noble as its goal is to support indies, they don’t need to support every single indie that comes to them asking to put their napkin idea onto the Vita.