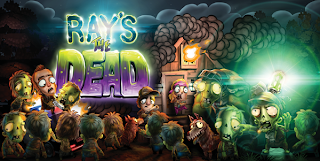 It wasn’t too long ago that I had a quick Twitter conversation with a then brand new start-up Indie studio, Ragtag Studios, letting me know about its iOS title, Unstoppable Fist. This simple mobile title not only packed a big punch, but it packed a lot of retro style and character right along with its flying fist. I thought to myself ‘this new studio was one to keep an eye on going forward’; especially considering the team was comprised of people who had worked on Stubbs the Zombie, Thief 3, Halo Wars and Stuntman: Ignition. Fast forward to today and Ragtag Studios has put down its flying fist (and feet) for a while and came out limping with its Pikmin and Stubbs the Zombie inspired new title, Ray’s the Dead. Oh, and that bit about “limping,” don’t worry that – it’s all part of the plan. 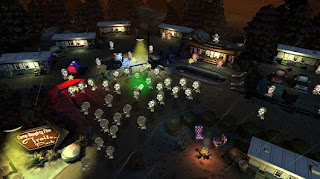 If Unstoppable Fist was packed with retro style, then Ray’s the Dead simply oozes its 1980’s retro charm. In our very early preview, we mainly got a small sampling of a number of the title’s unique gameplay mechanics, but it’s the title’s comical sense of character and atmosphere that captivated me near instantly. Firstly, the game’s very dead hero, Ray, is amusing in appearance alone. Using a fantastic hand drawn art style that could be described as a zombified variation of Paper Mario, Ray waddles around this whimsical world in such a way that’s sure to plaster a grin on your face.

Our dead hero is not like most zombies though, because Ray has a light bulb stuck in his head. Yes, a light bulb. See, Ray can use his light bulb to raise the dead when he is in cemeteries, which you will most definitely be in, because that’s where zombies live, err… are born. Anyhow, in true Pikmin fashion, Ray amasses a horde of zombies in each level and with the use of his trusty light bulb, commands them to do as his will bids. See a gate that needs a good bashin’? Acquire enough zombies and send them to knock that iron obstruction down for good.  While we only got a sampling of the different types of zombies that will drag a leg within Ray’s the Dead, we did get to attack many a policeman with the standard grunt zombies, stun a few bums with the speedy zombified dogs we picked up along the way in the Pet Cemetery level and sneak attack a few unsuspecting living peoples with the classic trick of hiding zombies in bushes for the good ole, “surprise you’re dead and about to turn into a zombie” attack. It’s a unique take on the classic Pikmin style.
Within each level there’s always some comical banter from the denizens that gave me a good laugh. One segment in the demo had us parading our zombie army right through an unsuspecting town that humorously cheered our zombie’s “lifelike costumes,” because it set during Halloween. As you can probably guess, our cover was blown pretty quickly as zombies love the living’s brains for a quick snack. Ragtag Studi’s is promising that Ray’s the Dead will bring a story driven single player gameplay experience that will blend action, stealth, tactics, puzzle and adventure within it. How did Ray get that light bulb stuck in his noggin? What was his life like before he crawled back out of his grave? You can bet your last finger that Ray’s story will hysterically unravel when the title crawls to a full release… if you have a finger left to spare, of course. 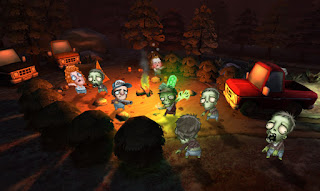 If you follow Kickstarter projects, then there’s a good likelihood that you heard about the recently funded Indie title Shovel Knight, from Yacht Club Games. This studio is made up of several WayForward crew members and Jake “Virt” Kaufman is designing the soundtrack for the upcoming retro title. Kaufman’s become quite notorious with gamers with the likes of Double Dragon Neon, Contra 4, Might Flip Champs and the upcoming DuckTales on his resume. It was his 80’s themed soundtrack for Double Dragon Neon that caught Ragtag’s ears though and it has brought the composer aboard the Ray’s the Dead project – making this unique Indie title that lets you command a diverse zombie army even more compelling in the process.

Ray’s the Dead’s Kickstarter campaign has already crept to life and brings along a wide assortment of stretch goals for the taking. The game is also listed on Steam Greenlight, so if you’re interested in embarking upon a zombie infested quest that allots you a legion of zombies to have fun with, instead of a legion of bullets to mow down our friends that don’t seem to want to remain in the grave, you can support this title’s development starting with a $15 investment on Kickstarter, which lands you the title once it is released for PC, Mac or Linux. Of course, you can also support the title by ‘Liking’ it on Steam Greenlight as well – Kickstarter backers will have the option for a Steam key if it is Greenlit.
Now if you will excuse us, we’ve got to hobble off to Ray’s the Dead.
Share this