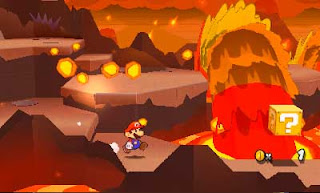 The games industry is somewhat notorious for chastising the lack of innovation in established franchises. Nintendo’s iconic Mario is no newcomer to such criticism; his recent outing in New Super Mario Bros. 2 met with much groaning from hardcore fans desiring a change of formula and a noticeable dip in critical reception. We didn’t mind the traditional approach at Digitally Downloaded, but clearly others did.

Along comes a better medium for risking the portly plumber: a spin-off series. Paper Mario Sticker Star seeks to freshen things up by changing many established elements of its own side-series. Regrettably though, much of the game is not based on innovation but its oft-bastardized child: gimmickry. That’s not to say the latest entry fails to present engaging new ideas, but many of them are feebly implemented or not fully realized. I certainly can’t see Intelligent Systems “sticking” with this format.
The adventure begins when antagonist Bowser touches a star with powers of mythological proportions. Chaos ensures and as such, Mario must rescue damsel in distress, Princess Peach, once again. Thankfully, this spin-off series has never been about groundbreaking, deep plots – it’s all in the climb. In that sense, Sticker Star delivers in spades. The humour, wit, and charm you’ve come to expect are as present as ever. In fact, they may actually be even better, thanks to some rather subtle (and occasionally borderline risqué) jokes.
For better or worse, though, the amount of dialogue and character interaction has been turned down several notches…and it’s easy to see why. This is just one in a line of many things that Sticker Star has downplayed.
The game’s main trouble lies within the new combat system. Gone are the days of levelling up, partners, and badges. Mario’s only real development comes in the form of hidden health upgrades. That’s not necessarily a bad thing – Super Paper Mario broke the JRPG mould and still met with success. What is bad is the replacement for the aforementioned features: stickers, stickers, and more stickers. These things are scattered all over the game’s world, buyable, sellable, and dropped by enemies. In order to battle, you need stickers. Since there’s no levelling system in place, though, this means combat is largely a waste of time. There’s the idea that the coins enemies drop after battle are worth something, but anyone with decent reflexes can rack up sufficient coins through exploration and the mandatory/accidental fights. The need to be careful with your attack items never really arrives. 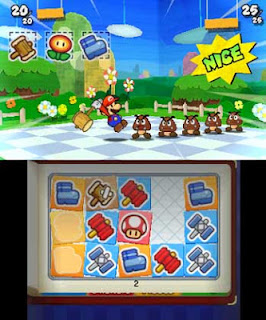 Thankfully, the mandatory fights – boss battles – actually showcase the potential of a battle system based on disposable items. While many baddies will go down hard and fast if you use a sticker they’re weak to, advanced players will get a kick out of using only the traditional ones to boost the challenge level.
Of course, the boss bouts (the better part of the game) have a problem that is all thanks to the new sticker system. Unless you are omnipotent, you probably won’t know what kind of beast you’ll be up against when you’re building your inventory. The boss of the second world, for instance, is virtually immune to hammers. Try as you might, the only way you can succeed if your inventory is 50 per cent or more composed of hammers is to get lucky with a roulette wheel repeatedly or know in advance that the boss will have specific traits. When you inevitably run away with your tail between your legs, you must return to town and spend coins to retool your drained inventory. I suppose that’s why regular enemies exist, then. Having some kind of sticker-free basic attack or even a stall function would have gone a long way.
Given time, you may well adapt to this new scheme. However, that doesn’t mean the change is either beneficial or warranted. Sticker Star takes an already streamlined battle system and streamlines it further, reducing player input, strategic options, and character growth in the process. Even functions like defending and doing nothing are removed, which further reduces tactical manoeuvres. I doubt many players were going to object to a system we haven’t seen in over eight years (especially after the mixed fan reception fellow combat outcast Super Paper Mario met with). You can’t say the title’s mentioning of stickers is inaccurate, I suppose.
Despite the simplified combat, there is some challenge to Sticker Star. Most of it can be found in the various puzzles, which range from mentally stimulating to mind-numbingly obtuse. Many focus on collecting objects or scraps and placing them in specific areas. Of course, if you aren’t made aware of an object’s existence or location and your guide character doesn’t offer any constructive information about it, this can be highly confounding. There’s also a lot of backtracking required, to the point where you need to return to town every time you get a new object and convert it into a sticker (which amusingly transform back into objects when placed, making the whole process seem dubious). Other ones are just obscure in nature and depend on your ability to find hidden blocks.
Between the stripped combat and shockingly challenging puzzles, it’s not clear who the target audience for the game is supposed to be. Perhaps Super Paper Mario’s platformer-esque approach would have been a better fit. There’s an overworld structure that apes the style of the early 2D Mario games. Super Paper Mario had you doing combat in real-time (which Sticker Star incorporates when it arbitrarily decides you’re too strong for some enemies). Why not combine the two and create a fusion of classic and modern gameplay? It would certainly remove some tedium, even if the puzzles stayed the same.
Mario’s latest should give you a solid 30 hours of gameplay. Admittedly several of those hours will be spent retreading old areas trying to figure out what you’re supposed to do or booting up an FAQ, but this is still a sufficiently lengthy adventure for the price. 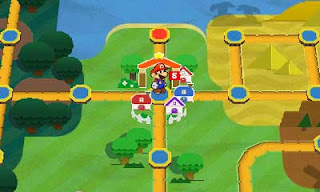 Despite my nitpickings and the game’s genuine shortcomings, Sticker Star is more fun than it really should be. There are some great ideas implemented, such as the relatively open world structure. If you’re not a fan of scrolling through walls of text, you’ll be glad to know there’s very little handholding as well. Even the 3D is implemented well (which says something since I’ve yet to be impressed by the 3D effect in any other game on the console).
However, most of what drives you through the monotony is the same stuff that made the other titles such a joy – a solid story, a charming world, and the sporadic insertion of unconventional ideas. Perhaps the series was due for a change, but it disappoints me to say that Sticker Star succeeds mostly based on the remaining laurels of its brethren.
At its high points, Paper Mario Sticker Star is a solid effort to try something new. The ambition is there, but it just doesn’t reach the lofty standards set by any of its predecessors. If you can stomach some questionable design choices and adapt to the new combat system, you’re still guaranteed a decent time. Newcomers are better served with past titles, however.
-Clark A