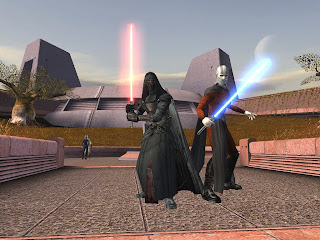 Our friends over at Pocket Tactics have a little story that should be of great interest to everyone who has an iPad. The classic Star Wars RPG, Knights of the Old Republic, is getting a port to the Apple platform.

Generally regarded as one of the greatest Star Wars games of all time, if not one of the finest RPGs ever made, Knights of the Old Republic was Bioware in its very best form.

Interestingly, despite the game not being available on the App store yet, and despite there being absolutely no marketing campaign behind it, IGN has apparently played a full version of it and reviewed it. Does that mean the release is right around the corner? Fingers crossed!

Between the Spiderweb RPGs, Bioware’s own Baldur’s Gate, and The Bard’s Tale, the iPad really is becoming a melting pot of the finest classic western RPG genre. Now we just need Bethesda to throw us a port of Morrowind and life really will be complete.