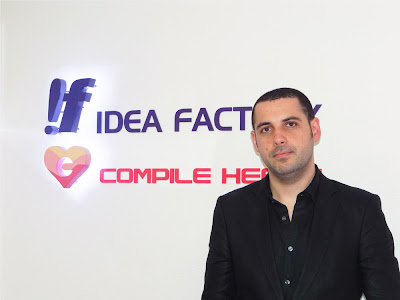 Damien Urvois has a career I could only describe as a Japanese game fan’s dream. After years working in the import/ export business and many of those years directly involving Japan and Akihabara, he joined the darling developer of Akihabara, Compile Heart, as a Business Development Manager. And he also works at Compile Heart’s parent, Idea Factory.

As I said – for any westerner with an appreciation of Japanese games, it’s a dream job. Compile Heart churns out niche hit JRPGs one after the other, and that momentum is not slowing down anytime soon. “2013 is going to be RPGs, RPGs and even more RPGs,” Urvois said. “We’ve already released Monster Monpiece and Holy Sorcery Story on PS Vita and Mugen Souls Z on PS3, and 2013 is definitely the year of Neptune for us. To celebrate the anime coming up on TV in July, we will be treating our fans to not one but three new Hyperdimension Neptunia titles this year.”

That’s in addition to a new RPG label that has just been announced, called Galapagos RPG, and the upcoming Fairy Fencer F on the PlayStation 3. The team at Compile Heart do keep themselves busy. It is proving to be a successful business model not just in Japan but the rest of the world as well because, precisely at a time when the cost of game development is spiraling out of control – especially for such large projects at RPGs – Compile Heart focuses on developing much smaller-scale (and developmentally inexpensive) RPGs at a faster rate. It’s working because the content of these games gives the company a strategy that maintains a niche but loyal audience, and reduces the risks inherent with producing a game that needs to finds mainstream appeal in order to be successful (consider the fate of Kingdoms of Amalur as an example of that in action).

“We target a very different audience. If ‘bigger developers’ are targeting core gamers, let’s say that Compile Heart is focusing on the ‘super hardcore gamer’ community,” Urvois said. Risks do remain in this business model – upset the fanbase and you can have a catastrophe, but it’s something that Compile Heart recognises and actively works to mitigate. “To be honest, we just listen to our fans and try to come up with very unique concepts to surprise them. As long as we receive good feedback from them and it makes sense economically, we will continue making our RPGs.” Urvois said.

Bringing games to the west

The most significant challenge that Compile Heart faces as it continues to grow is not its domestic business. Rather, working out a strategy for bringing the likes of Hyperdimension Neptunia to the west for the same niche audience that Compile Heart maintains at home in Japan, while at the same time avoiding raising the ire of the mainstream (and the censors) is a delicate balancing act that the team (as well as its localisation partners in the west) need to carefully weigh up with each game.

It has meant some unfortunate decisions, such as the censoring of Mugen Souls for the western release (though Urvois insists that the removal of a select few scenes from that game was an act of “cultralisation” rather than “censorship). It means we likely won’t ever see a release for the delightfully weird Monster Monpiece (see trailer below) on the PlayStation Vita.

But while there might be a business justification for these tough decisions, too much censorship would upset the dedicated Compile Heart fans – that small community that has grown Hyperdimension Neptunia from a nothing title to a healthy franchise in the west just as it has in Japan. In fairness to the team at Compile Heart and its ability to achieve that necessary balance, it does push through some elements in its games that many would find distasteful in western culture because they amuse the target demographics. Witness for instance the infamous CFW Trick scene from Hyperdimension Neptunia mk2:

“I am personally against all forms of censorship but sometimes you have to make a few adjustments to not be misunderstood,” Urvois said. “What is considered sometimes edgy in the West is seen as normal or of no interest in Japan, and vice-versa.

“We have decided to take a more serious approach to developing Fairy Fencer F but we don’t plan to tone down our other series, such as Hyperdimension Neptunia or Mugen Souls, because fans have asked us to incorporate those elements in our games. So why should we change anything?” Urvois added.

The other great advantage that is afforded to a niche developer is that it can take more creative risks with its titles. When you pair that up with a niche game platform like, say, the PlayStation Vita, it’s a breeding ground of creative opportunity. For all that focus on RPGs that we’re promised, Compile Heart is experimenting with other genres, and indeed some of these might well be localised as well.

“Hyperdimension Neptunia PP [on the Vita] is a very unique and fun Idol management game where you, the producer, will have to manage your favorite CPU’s career and help her become a Gamindustri superstar,” Urvois said. I think taking your cornerstone RPG and producing an idol game around it counts as a creative risk. “The second title will focus on Noire and the only thing I can say for now is that we want to offer something a little different to our fans and explore new genres with the Neptunia series,” he added, showing that Compile Heart is continuing to look to push its own boundaries further.

Of course, the big focus this industry in the games industry is that we’re going to have two additional consoles on the market by the end of the year. Compile Heart has never really supported Nintendo’s home consoles, so we can assume that will follow on with the Wii U (though I can immediately think of some very interesting possibilities that that Gamepad could be put to for this team’s games…). It has offered limited support for the Xbox 360, but the real console we’re looking forward to seeing Compile Heart working on is the PlayStation 4.

They’re as enthusiastic as we are, according to Urvois. “We are all very excited by not only the PlayStation 4 but the next gen in general and all the new possibilities it can offer in terms of gameplay and user experience.

“Unfortunately, I cannot share any details on any next gen projects with you at this stage.”

In the meantime, Compile Heart continues to remain approachable and niche; keen to work with its small but dedicated fan base to give them the games that they want to play.

“We focus on RPGs because it’s our favorite genre, but we’ve also been developing otome games (visual novels) and Hello Kitty games for years now. Now we are developing an idol game based on the Neptunia series,” Urvois said.

“Is there any specific genre you would like us to try next?”