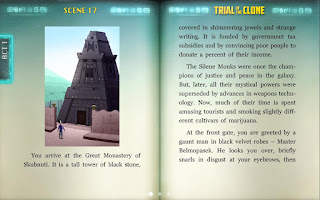 Tin Man Games specialises in one kind of game – the gamebook. Specifically, the developer focuses on bringing the gamebook style of play to the iPad and iPhone.

This means Tin Man Games games require a lot of reading, and offer very little flashy graphics and gimmicks. Still they manage to be compelling for one very good reason – these gamebooks are masterfully written and worth reading and re-reading to see and do everything.

Never played a gamebook? If you’re younger that’s not surprising – these games are a bit of an 80s fad. Basically they are choose-your-own-adventure games where players read a passage and then make a choice. One choice will send them to one new page, while a different choice will send them somewhere else in the book. 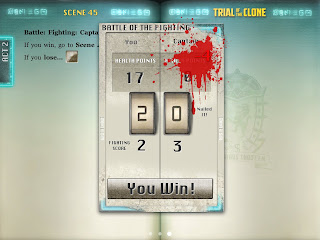 As players make more decisions the book’s story branches out further. In most cases there’s only one or two successful ways through a book and players will meet dozens of gruesome ends in trying to figure out the right way through. But that’s OK, that’s the fun of the genre and most of us cheated by backtracking anyway.

The difference between vanilla choose-your-own-adventure books and gamebooks is that gamebooks added a basic RPG-style combat system in where players would roll dices in various combat encounters to Final Fantasy the experience up a little. It was never deep, but for those of us who were sometimes limited in our ability to get players together for some real Dungeons & Dragons this was the way to go.

Video games largely made the gamebook obsolete and most of the folks writing them went and found other careers. But then the iPad became a thing and suddenly gamebooks found a new home, as actual games. Tin Man games has had a good run and produced some modern classic gamebooks and even some cleverly licensed titles like Judge Dredd. But Trial of the Clone is the first real comedy release for the developer. And not just any comedy. This is the kind of deliberately horrible comedy that fans of Monty Python would get a kick out of and is best experienced with a British accent.

Far from a bad thing Trial of the Clone is downright entertaining. Silly and throwaway, but entertaining. Of all of Tin Man Games’ titles – and I have loved them all – this is the one I’ve enjoyed the most while I was reading it, but I also imagine it will be the one I forget the quickest. As is natural for comedy, it’s rare that it leaves more than a vague lasting impression, and that’s the case here too.

But with plenty of challenge, a fun art style and a nice, simple combat system I can recommend this book as easily as I recommend the rest of Tin Man Games’ titles. It’s perhaps not the best starting point for anyone new to the genre, as the silliness requires that players have at least a passing understanding of the genre to be able to laugh along with it, but for veterans this is a nice change of tone and pace for the series.

Oh, and there’s an option to “Turn Wil Wheaton” on. Select it and the voice of Wesley Crusher will narrate the entire book to you. There ya go. Now you have to buy it.