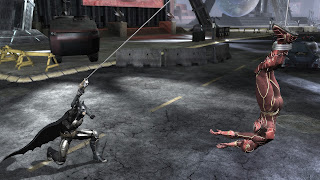 Warner Bros. clearly had this game in mind when it acquired Ed Boon’s team at NetherRealm Studios. It must have been a moment of celebration at the publisher’s headquarters when a premier fighting game developer went on the open market; here was after all an opportunity to bring in-house the development of a superhero fighting game that was finally going to do justice to superhero fighting games.

So NetherRealm was acquired and Injustice: Gods Among Us is a Mortal Kombat game with a DC universe skin. As awesome as the game is, there is a problem with this setup that permeates the entire experience; Boon and his team have not fully been able to break away from their own design traditions and philosophies and this game is so slavishly faithful to the Mortal Kombat franchise that I was honestly surprised that I was not able to execute fatalities. And even then each character has an ultra attack that looks and feels like a bloodless fatality. 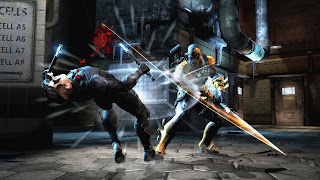 Despite the difficulty in looking at Batman and not thinking “reskinned Sub-Zero”, the dark themes of modern DC characters slots in well over the Gothic horror of Mortal Kombat. As such, aside from a few awkward moments, thematically Injustice is a robust and intelligent character mashup – a far more pure take on the universe than anything Marvel has done in recent years.

The vision is so pure that perhaps the most impressive part of the game has nothing to do with the combat but rather the plot. Perish the thought that a fighting game has a story worth following, but from start to finish the game’s plot is a fan’s dream come true. We’re talking about a story that manages to turn Superman bad, kills The Joker, and otherwise plays with people’s favourite heroes and villains without really breaking continuity thanks to a clever alternate dimension narrative trick. It’s short, but the breakneck energy in which it runs through the chapters is executed with such style that the game rivals the finest DC animated shows. 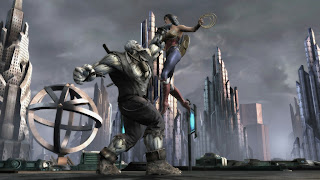 It is just as well that the theming looks after the game as the Mortal Kombat combat structure is kitsch and clunky, not even close to the graceful depth of a Dead or Alive or BlazBlue title. It works and is completely glitch-free, it’s just limited compared to other fighting game systems out there. Here is a game where it’s possible to get stuck within entire health-bar depleting combos and the environmental effects that the developers have thrown in are able to wipe characters out of commission far too easily.

There’s a couple of moments where the game throws in some strategy, such as a risk/ reward mechanic where a player’s super power is tied in with the same energy bar as a variety of defensive functions. Deciding what to use that limited energy on throw some thinking into a game that is generally more fun button mashing than in executing combos with precision. But other problems with the balancing don’t take long to reveal themselves; there are some characters that are far too powerful and others are too spammy. The game doesn’t really reward blocking – the wonderful counter system of a game like Dead or Alive isn’t present here and because of that the game is far too skill-free and aggressive for my tastes. 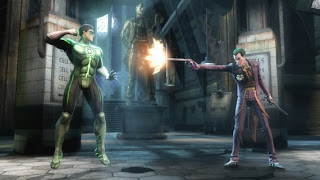 Just to make this clear: I didn’t much enjoy the combat in Injustice, just as I’ve long moved on from the barely-there evolutions to the combat of Mortal Kombat. I enjoy the local multiplayer because it lets Batman beat the living hell out of Aquaman. In fact, beating up Aquaman with any of the 23 other characters is always going to be a hoot. And I enjoyed the story mode for the same reasons I liked The Avengers movie – it’s an adrenaline rush for anyone that likes superheroes. Between those modes, there was more than enough content in this game to justify its purchase.

It’s also a gorgeous game on the eyes. Environments are filled with details and those environmental effects ensure every match is dynamic and exciting. So there’s a lot I did enjoy about the game. But I’ll never really get into this game’s online mode, and I doubt I’ll spend enough time with the non-story single player game modes to really complete them. It just does not have the depth or nuance that makes it, in my humble perspective, a legitimate serious competitive contender.

It might seem a little strange that I am whole-heatedly recommending a fighting game that really is not up to the same standards of the great fighting games out there. But here’s the reality; the only people who will look at Injustice and think to themselves “this looks good” are the fans of the DC Universe. And for those people I don’t think it will really matter that there are better fighting games out there – this plays well enough, and it rocks because it lets Batman beat the living bejeebus out of Aquaman.

Review: Trial of the Clone (iPad)