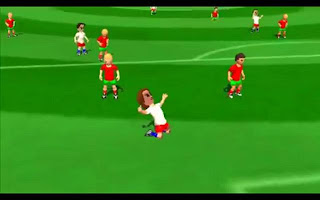 The first thing you’ll notice about Soccer Up 3D is that its content is disappointingly limited. While it is a downloadable sports game on a handheld, the goal (no pun intended), of delivering a game with an attractive offering means it should feature some substance that will leave the player wanting more. Unfortunately, this isn’t the case here.

As I was saying, there isn’t much content to distract you. When I blindly tapped on to the main attraction, I clicked on random settings, clicked random countries to play as and tried my darnedest to win. I completely failed. The upsetting truth is that the gameplay mechanics are so broken it’s laughable. I’m not the most experienced FIFA gamer (here, play this – ed) nor have I played soccer substantially in the past in my real life, but I’m aware that when I kick the ball off-screen, a teammate should be running towards it in an attempt to sweep it up. Basic soccer tactics, there – try to get the ball.

Every time I kicked the ball off-screen to a random teammate, I was rudely intercepted by an opponent who – as predictable as it came to be – always seemed to feature advanced AI unlike my entire team. There’s no mechanic that allows the player to precisely direct the ball in a direction he wants to kick it. More times than not, I kicked it to an opponent when an ally was closer in my general direction. 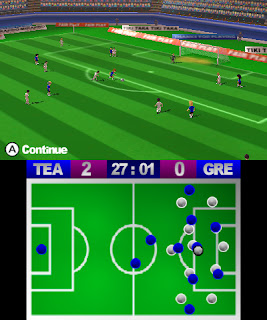 In EA’s massively popular franchise Madden (not soccer, but some of the basic mechanics work in a transferable manner), when the play begins, you’re given a few optional players to pass the ball to. When chosen and caught, your role is switched to that player to run the football as far down the field as possible trying to achieve a touchdown or a first down. In Soccer Up 3D there’s a few issues with what should be a transferable mechanic. You cannot pick a single character of your choice control at any time. With that, passing the ball or forming any kind of strategy is thrown completely out of the window.

Secondly, switching players is either random or forced. If an opponent has the soccer ball, your cursor is switched to the closest player to the ball. Which sounds great on paper, sure, but every time the ball moves, none of my teammates are anywhere close enough to be efficient. Pressing the X button switches to the closest player manually but this feature is also useless as it is interrupted by the automatic lock on system.

Another big issue was that there wasn’t even a tutorial to help explain the flawed mechanics. Nothing, zero, zilch! I thought for sure the ‘Training’ option was the tutorial but it was basically the main game minus an opposing team and stripping away everything that could have made this mode an effective training exercise. Actually, the closest thing to a tutorial Soccer Up 3D offers is a control panel explaining the controls. 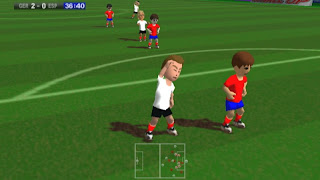 The online community is about as active as MySpace. I really wanted to see the online mode redeem this ultimately broken experience. After waiting two and a half hours, not even one soul joined my lobby. Actually, there wasn’t an option to enter another player’s lobby whatsoever. All it gave me was a ‘Create Lobby’ option. I think there’s an issue at hand here.

Soccer Up 3D also supports one of the worst 3D effects I have yet to experience on the 3DS. It feels like I’m looking at a broken mirror cross-eyed.No additional textures, the resolution is lowered and the experience is headache-inducing.

Soccer Up 3D should be avoided at all costs. Every aspect is shallow and broken, it not only brings nothing to the table but you’re better off burning that hard earned money rather than spending it on this.