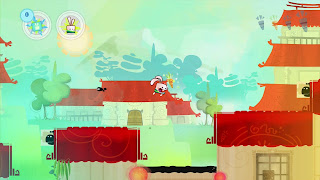 I’ll put this out there before I point out that I really do enjoy this game; a year from now (if not sooner), no one is going to remember Kung Fu Rabbit.

This is a port of a mobile phone game that is being sold for three times the price you can get it from the app store. As such, as soon as the Wii U eShop has more than a handful of downloadable titles, this game is going to get buried and forgotten by just about everyone.

Which is actually something of a pity, because the game is a lot of innocent fun. Though it is expensive compared to its iOS brother, it’s still one of the cheapest eShop games, has mountains of content for the asking price, and it’s easy to argue this game benefits enough from those buttons to be worth the extra few dollars.

As you can tell almost immediately from the screenshots, Kung Fu Rabbit is a basic platformer game. Across each of the fairly short levels players will be tracking down four carrots, jumping from ledge to ledge (and yes, there are wall jumps), and either avoiding enemies, or hitting them from behind for an instant kill. It’s all very simple, very elegent, and thanks to some lovely backgrounds and a cute rabbit lead character, there’s some nice personality to the game. 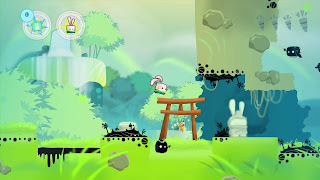 There’s a gentle learning curve, but there enough levels in the game that it can afford to be gentle; there’s still going to be a host of levels later on in the game that should challenge most people. It’s unfortunate that in those more difficult levels there’s some challenge added in thanks to an unsteady frame rate, but those problems are isolated enough that it doesn’t really take away from the entertainment value of the game.

As players do well they earn points and in standard mobile game fashion these points can be spent on upgrades and items to make players lives easier. Thankfully here there players aren’t pressured into in-app purchases, but the system hangs around, and for less skilled players to get through some of the tougher missions they might find themselves getting bored by replaying easier levels to earn enough carrots to grab the all-important powerups.

But for the most part, it’s just plain, clean, fun. There’s not much more than that to this game and anyone who goes in expecting more would do well to remember that this game was designed to make more bearable those five minute commutes at the end of the day when you’re squashed into a train with dozens of other sardine-people in desperate need of a bath or shower… But, for now, if you’re looking for an afternoon-killer, well, it’s something extra to play on your Wii U.

Interview: Tin Man Games on making a successful career out of the dead gamebook genre