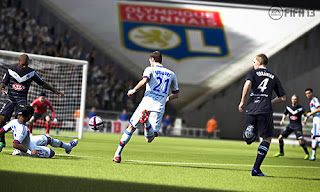 The FIFA World Cup is the world’s biggest sporting event. It actually eclipses the Olympics in terms of overall attendance and viewers.

So it makes sense that the greatest investments in sports game development is in soccer. EA’s FIFA Soccer and Konami’s Pro Evolution Soccer (PES) enjoy a relationship where each forces the other to improve year after year, or risk losing its hold over a massive, lucrative fan base.

And yet in that endless persuit for perfection a few things have crept into both series that make me wish there was a genuine third franchise out there worth talking about. Neither FIFA nor PES are especially welcoming to new players, for a start. These are franchises that now each year seem to have been built for existing fans first, and acquiring new customers second.

FIFA 13 has some low difficulty modes making the on-pitch action comfortable for even the dunce player, it’s true. But that said (and this is a complaint that applies to quite a few other sports games now, too) those menus that hit you when you load the game up are way, way too dense with information and gameplay options. It’s noble that EA Sports have given people so many ways to play, but the actual game is getting crushed under the data. There’s the be-a-pro modes, there’s standard tournaments, there’s a bevy of online features. There’s 50 different leagues to choose between. Finding your way to the gameplay style that suits you best is actually a longer process than most game’s entire length. 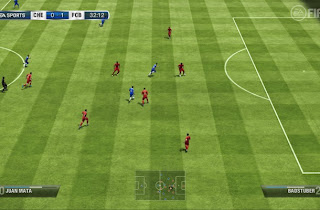 Once you find that ideal gameplay mode, the on-pitch action is as tight and engaging as you would expect from a series with such a long heritage. It’s possible for players to get in and enjoy a reasonable chance of scoring a goal with minimal understanding of the strategy of soccer and the four face buttons on the PS3 controller. This much is far more accessible than PES games, which are brutal without a genuine understand of when is the right time to kick that through ball into the box.

Experienced players, on the other hand, have a huge range of strategic tricks up their sleeves to play with – not as in-depth as PES here, but enough to test the finger dexterity of almost everyone. For the experienced player, the deep simulation side of the FIFA series has always been the other great drawcard over PES, and it remains so with this year’s edition.

Most impressively though is a feature that’s almost set-and-forget. EA’s server and online services have progressed to the point (thanks to features like Origin) that FIFA 13 is the start of what should be a beautiful tradition – your statistics will transfer from one game to the next. FIFA 14 will not be a complete press of the reset button, and suddenly buying each year’s game will make more sense. 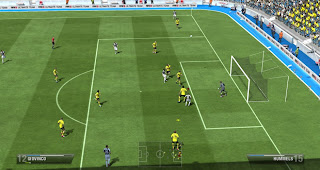 In terms of presentation, FIFA 13 still has some rough edges. Scaled back during the matches themselves the animation looks quite fluid and there’s some dynamic ball-handling skills on display. But zoomed in for cut scenes, replays and the like and the individual soccer players are still wooden marionettes. Their likenesses to the real players is also somewhat forced. It’s better than it has been in previous years, but it still looks a little like stickers stuck over an egg. I like the aesthetic style of the PES series and tend to play with the camera zoomed right in. I kept the camera as far away from the action as possible with this game. It’s not to say it looks bad, and the interface is nice and clean, it’s just that FIFA was clearly developed for those long distance camera shots.

It’s impossible to review FIFA without comparing to PES, as you’ve seen from this review. They are both of course highly competent sports games, and offer recreations of the beautiful game that are beautiful in their own right. FIFA is somewhat more accessible than its rival, offers somewhat less for the experience player, and buries people under masses of data.

But I really can’t get past the potential for the EA Origin accounts to shake up the whole value proposition of this FIFA game, and future instalments. Just like how iTunes has locked me into my iPhone and iPad, the Cloud account for my stats and other FIFA details may just lock me into this series into the future.

We have a new Frequent Flyer reward! The Splatters on Xbox 360!