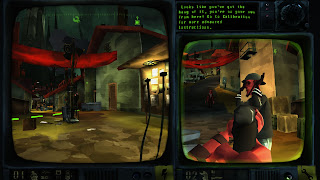 Signal Ops is one of the many titles that proposes a fantastic concept, yet executes it in the most appalling way. On paper, a game that is part real time strategy and part first person shooter sounds unique and potentially enjoyable, but here in execution it’s an absolute mess.

When on a mission, players view three monitors with three soldiers inhabiting each of them whilst managing every action that each takes. The concept is to control each character separately and take advantage of their abilities to advance in the level while trying to remain stealth. There are no objectives that depart from this formula and while that’s not really a complaint, my experience with the game’s systems is.

Controlling each soldier is a chore all on its own. Sure, you can select and control each character as you see fit but when in the moment of a heated firefight, this system is so inconveniently executed that regardless of which one you choose, you’re bound to take an absurd amount of damage. Even the basic controls are a mess. Aiming down the sights is so slow and inaccurate that I questioned if this was a first person shooter or a game made specifically to irritate. 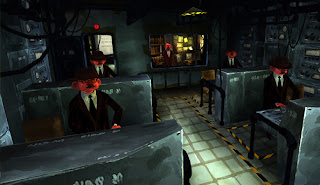 The radioman that “assists” the soldiers is the key to success and is one of the most unnecessary faults in the game. This radioman has a radio transmitter that, if you’re not in the limited range of its signal, your screen is infested with static and it’s impossible to see anything. His power source also decreases rather quickly which can be tedious selecting him, as you’ll constantly need to find an electrical source and return to the objective at hand. Several times I accidentally walked out of range and forgot what direction I was facing. So, I had to select the radioman, walk him over to my gunman and continue from there on out.

Pacing doesn’t even exist in Signal Ops since most of the time I’d either attempt to ignore the stealth option and get caught, or I’d lose signal to one of my allies. There are no missions that necessarily stick out as entertaining or memorable. The only times I had any form of satisfaction was when I completed a mission.

The art direction is credible in the sense that it’s trying to be something different, but that’s all there is to it. The smeary textures run in with one another like it’s a pre-schooler’s finger painting. The entire purpose of stealth based action is to hide behind objects and evade enemies’ field of vision. From the minute the tutorial started, I’ve had trouble managing this. Hiding behind walls with the keyboard is a stiff task and even when I’m completely hidden – or slightly glitching through the object – the enemy still catches me. 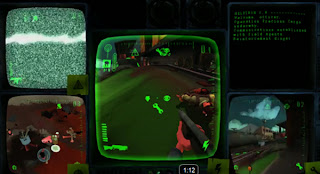 Thankfully, the score and voice acting are quite enjoyable. After I trudged for nearly an hour trying to figure out how to control my character efficiently and open the door from which I spawned in, I was not only greeted with some stellar, leery music but some of the neatest dialogue to come out of an independent studio in a long time.

Signal Ops showcases quite a few good ideas but falls flat on its face. Slow pacing, tedious gameplay, poorly executed mechanics and graphics that would make a grown man cry, earns this train wreck a pass.