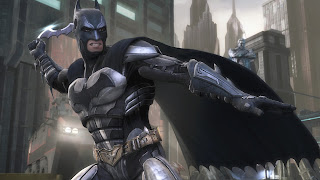 The premise has appealed to me since the day I first read about it: NetherRealms Studio will take a huge pool of DC characters and plunk them down in a Mortal Kombat-style of video game. It sounded brilliant, but there was at least some cause for concern.

After all, while I am a big fan the last Mortal Kombat title in particular, and fighting games in general, I kept recalling Mortal Kombat vs DC Universe – a fighting game that had some good ideas and obviously paved the way for Injustice to happen, but never really impressed me much. I am happy to say that Injustice completely did away with my concerns, proving itself to be an excellent game that gets a lot more right than wrong.
(Check out our other review of the game here)

The combat is the most important part of a title like this, and it is both accessible to newcomers while offering a good deal of depth for those who want to really delve into a particular set of characters and learn their special moves and combos. To me it immediately felt familiar, while still different than Mortal Kombat. Instead of kick and punch buttons, you get a light, medium, powerful and special move button. The first three function similarly from one character to the next until you start using them to unleash character specific moves. The special button is unique to each character. In some instances it will change the character’s weapon set – such as Wonder Woman trading in her lasso for a sword and shield, or Nightwing switching from two short sticks to a single staff. In other instances, it will act as a temporary power-up for characters such as Flash or Superman. For characters like Green Arrow and Batman, the button becomes an attack in and of itself, such as an arrow shot. 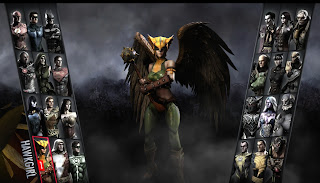 There is a meter that fills during combat based on damage dealt and received. This meter can be spent a few different ways. You can tack on an extra bit of damage to your special moves, using one segment of the bar in the process. Once it is completely full, a super attack can be triggered that resembles the brutal x-ray attacks of the last Mortal Kombat title. these scripted, multiple strike attacks can do substantial damage, usually knocking out more than a quarter of your opponent’s health. They lack the blood and gore of Mortal Kombat – Injustice as a whole does actually – but these scripted combos are impressive and brutal-looking all the same.

The last use for the meter is a sort of wager system a desperate character can trigger. The two characters will clash, each wagering a piece of whatever meter they have filled to that point. Health is then lost or gained, depending on who wins and by how wide of a margin on the wager. It sounds complicated, but after one or two goes you have a pretty good idea how it works. It can prolong a match, even turn it around if enough life is gained. It is not my favourite mechanic, but it does keep you on your toes – especially in online matches.

Environments are an important part of the combat as well. Every stage has some interactive segments that sometimes work differently depending on if you are a strong or agile type of character.  The piano in one stage can be flung by any of the characters, but a large energy unit might only be jumped off of by the flash while Superman may pick it up and throw it at someone. There are also transitions in all but two of the levels. If you perform a knock-back attack along the side of some stages, you may send your opponent flying through a brief scene where they take lots of damage bouncing around the environment and landing on a new part of the stage to continue the fight.

This does bring up one of the most important questions in any fighting game, and that is the whether or not characters feel balanced. I do have a few concerns on this front. While I do not see everyone online using the same two or three characters, I do generally see the most successful people using characters with strong ranged attacks (Superman or Deathstroke for example) outperforming those who rely more on melee range (like the Flash). Also, I felt like the stronger characters had an advantage over the agile ones when interacting with the environments. Superman can not only deal damage by throwing the huge crystal ball in the background, dealing damage to Flash in the process, but he takes away Flash’s ability to use it once it has been destroyed as well.

The visuals are generally excellent. Most of the character models look really good, though a few like Wonder Woman could have looked better. Some of the costumes will appeal to some fans more than the others, I am sure. that being said, they are all quite detailed and move very fluidly. The environments also are very detailed and have a lot of activity and movement as these incredibly powerful characters cause a great deal of carnage during their battles. 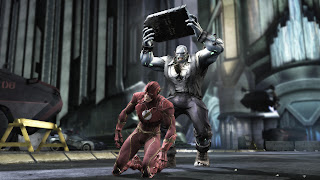 The music is generally good, if not great. The voice work is excellent almost across the board, which really helps to sell the story and add some flavor to some of the interactions (like Lex Luthor and Superman). The story itself is a dark turn for the DC characters, revolving around an alternate universe in which Superman loses everything that matters to him and decides to fully unleash his powers while basically taking over the world. The story mode is handled very well, with similarities to other fighting games like Mortal Kombat and Dead or Alive where you take on the role of a specific character for a handful of chapters before switching over to someone else. It takes a couple of hours to get through and gives you exposure to about half of the roster to play with at one point or another.

There are a handful of other modes to occupy your time as well. There is a battle mode that offers up a tonne of different options, such as fighting only rosters of villains or heroes, playing while poisoned and more. You can also train and do quick 1-on-1 matches both against the computer or against a local opponent. There are also several very active online modes right now, including typical ranked 1-on-1 matches, as well as King of the Hill and Survival lobbies. Connectivity and lag are always a concern, and while it is nice to see the servers active with players, a bad connection by either party can make the battle almost unplayable.

Lastly, you earn experience, which leads to levels and unlock cards. These cards can be used to access music files, character art, alternate costumes and more. It gives you yet another reason to keep going back and playing through alterntae modes after having beaten the primary storyline.

I was someone who was disappointed by Mortal Kombat vs DC Universe a few years ago, as well as Injustice on the iPad (which does have some tie-ins to this title if you play and register for both games using the same account), but am happy to say that the console version of Injustice: Gods Among Us is an excellent fighting game that DC fans owe themselves a chance to play.

Making games with Construct 2: An introduction