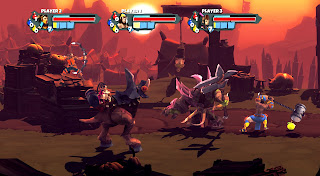 I am a big, big fan of the Sacred franchise. Some might say they are mere Diablo clones, but the scale and scope of these games – especially Sacred 2 – makes it easy to lose weeks of time exploring a truly massive world. Throw in a reasonably interesting mythology and the this was one of the more memorable examples of the genre for me.

While we wait for Sacred 3, Sacred Citadel has been released as a way to remind players that this franchise exists. As a marketing ploy in giving the brand a boost before the release of the next main game, Sacred Citadel is smart. It is unlikely that it cost much to develop or drained too much development time. As a simple hack-and-slash brawler it’s a nice safe genre that is a lot of fun in multiplayer. 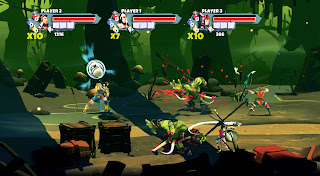 But I am really, really disappointed by this game. There is so little in here that reminds me of the Sacred franchise that I love so dearly that I found the whole experience a little cynical. Generic brawler plus Sacred franchise name might equal a paid-for advertisement for Sacred 3, but it leaves a sour taste in my mouth as a fan of the franchise.

That’s not to say that I didn’t enjoy my time with the game. In fact, as I mentioned before, in multiplayer it’s downright hilarious fun – just like games like The Simpson’s Arcade Game and Scott Pilgrim are. These games are fun in multiplayer because with a few beers the limited combat system and minimal interactivity (aside from moving left to right and hitting stuff) does not really matter. It’s simple; it’s an easy way to unwind. 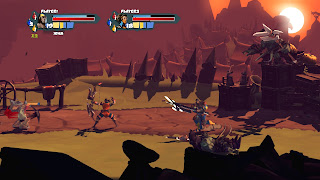 Sacred Citadel achieves this. There’s slight differences between each of the heroes and there’s some basic teamwork strategies that can be executed in the multiplayer. It’s tough enough that players will be kept on their toes, and it looks good enough with a bright and colourful art style. There’s a nice combo system in there that adds a nice competitive touch to the game – the longer you go stringing attacks together without taking damage, the higher your personal score for the level, and there is an undeniable thrill from coming out the other end of a particularly difficult set of encounters with the highest score.

Characters also level and unlock some new special abilities as they go. Though these are somewhat limited in effect they are portioned out at just the right rate that players will have a steady stream of new toys to play with. There’s a lot of levels to play through too; get into this game and it will more than repay its cost. It’s also worth noting there is next to nothing to do outside of combat – just a barely interactive “town” to buy up items for use in the combat, but that’s OK since if you’re playing this in multiplayer you’re not going to want to waste time outside of the missions. In other words there is no padding in this game. 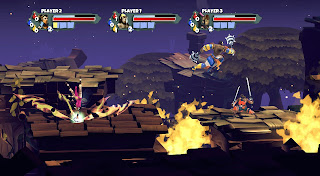 Is it enough though? Certainly not in single player. As with many brawlers the long-term value of this game is limited to a single play through solo, and then it will be broken out solely for multiplayer sessions. In many ways that is the reverse of the other games in the series, which were better experienced solo.

Which brings me back to my original point that I am disappointed with this game. It doesn’t really fulfil what I’m looking for in a game that bears the Sacred franchise. By the same token, unless you’re a fan of the Sacred franchise this game doesn’t really offer anything that isn’t readily available in dozens of games this generation, including ports of the absolute classics of the genre.

So who will actually want to buy Sacred Citadel? I’m honestly not sure.