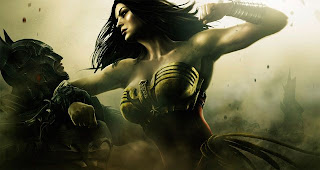 The upcoming console release of Injustice: Gods Among Us is worth getting excited for. Bringing some of the finest heroes and villains in DC Comic’s considerable portfolio together for some fighting action developed by the guys behind Mortal Kombat? Yes, yes and yes.

The dark, brooding visuals and character design is spot-on and atmospheric, in a way similar to the stricking visual design of recent Batman movies perfectly reflects a more mature and intelligent kind of comic hero. The combat in the console version is tight and engaging – we’ll be getting to a review of that in the not-too-distant future at Digitally Downloaded.

Today, though, we are here to talk about the iOS free-to-play game that shares the same name. This game is anything but an engaging fighting game. In fact, it is so simple, and so cynically designed around “encouraging” players to shell out real money that this game has very nearly turned off my interest in the whole franchise. 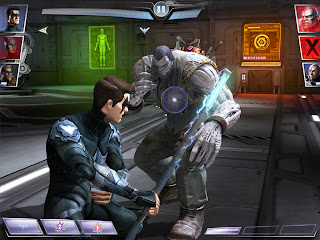 If the iPhone had buttons, this game would be a button masher. In fact, it’s embarrassing how simple the game’s combat is. Players tap the screen for light attacks, and swipe on it for stronger attacks. Stringing together a couple of light attacks together opens up the opportunity for a powerful move at the end of a combo. Then there’s the ability to block, and a special attack meter that builds up over the combat.

The only strategy involved in this game is deciding when to use those special attacks. There are three “levels” that can be built up, so players can choose whether to save up for one really big attack, or make a series of smaller, less powerful super attacks.

Each character plays basically the same, with some slight variations to speed, power, health and strength. Not enough different to make character choice interesting, mind. Players can take three characters into battle, and once they’ve picked their favourite three there won’t be much of an encouragement to try the others. This is compounded by the fact that these characters will level up with use, meaning that the favourite three will be the only ones capable of taking on the tough challenges without some serious grinding through old levels. 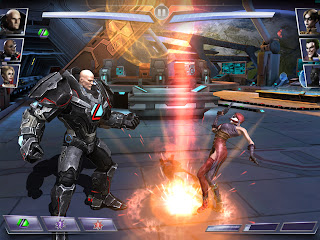 Like most free-to-play games there are timers built in. After using a character a certain number of times they’ll need to be rested for a while. I will never understand why iOS developers insist on telling people they can’t play a game they really enjoy. Aside from a cynical grab for cash these features serve no purpose in enhancing the actual game, and now that they have become standard they’re a major hurdle for iOS gaming to overcome if it wants to be taken as seriously as PC and console games.

It’s not the only cash-grab attempt by the developers, either. Character unlocks come very slowly unless players use real money which is another big problem since the combat is so simple that it’s hard to see many people dedicating the time to unlock them all.

Compared to other freemium games, like Real Racing 3, Injustice: Gods Among Us has a lot of content, but it’s not nearly engaging enough to keep players working through to the end. It’s a pity; the console version is all-but guaranteed to be a hit. It would have been nice to see the iOS version follow suit.

– Matt S
Find me on Game Center: WaltzIT
And also on Twitter: @DigitallyDownld