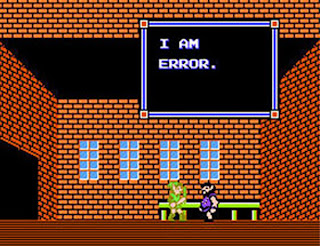 I’ll be the first to admit I’m not a huge Zelda fan. The storyline(s), puzzles and creepy characters always put me off as a kid. Unlike Mario, The Legend of Zelda never sucked me in from beginning to end.

Indeed, Zelda was one of the few big names of gaming that I didn’t get into and even though I played The Wind Waker, Ocarina of Time and A Link to the Past – as great as they are – I never had the inspiration to play them through. When I first played Zelda II years ago, I didn’t know how to interpret it and I didn’t like it, just how I didn’t like any other Zelda game.

Part of Nintendo’s Ambassador Program for 3DS owners, I got my chance to play Zelda II again and at my own pace. This time I found it to not only be a very underrated NES adventure, but the most exotic, daring Zelda Nintendo has ever crafted, and with it being free to the early adapters and now available for everyone via the eShop for a measly $5, you’d have to be crazy not to try it.

Zelda II’s storyline is fairly straightforward: The Princess of Hyrule, Zelda, is in a deep sleep and it’s up to Link to awaken her by stopping Ganon’s evil forces from resurrecting him. The first thing you will notice is that the game now plays like a 2D sidescroller a la Mega Man. The freedom isn’t limited to solely going right and jumping up, though. You’re allowed to exit the battle arenas and explore large dungeons in any direction it allows.

The combat on one hand is a rewarding obstacle to overcome, whereas on the other it feels completely unfair and dated. Swinging Link’s short sword can result in health depletion if not executed correctly as certain enemies are too fast to hit manually and others have a specific sweet spot. In its entirety, yes, it’s dated but it’s nothing drastic as most players will accustom to it.

The world map is much, much larger than the original Zelda game. Like in Square’s early Final Fantasy games, enemies randomly spawn for you to encounter and defeat and depending on where you are in the world map determines what terrain you’ll be enduring such as swamps, grasslands, deserts, etc. Running along the main dirt road will keep you protected from enemies and result in a dud of a battle sequence. Within secret areas are helpful items that include experience bags, heart containers and magic potions. When crossing bridges and certain unmarked, dangerous parts of the map, you’ll be expected to face an undying force that will do anything to kill you. Things like Lizalfos constantly throwing fire balls at you while they are safe behind a wall or spirits crashing into you at neck breaking speeds.

Multiple RPG elements exist within Zelda II as well. Leveling up your magic, strength, and health, and casting spells are just a few to list. Going to nearby villages to get clues on where to go and to learn new abilities is essential. The fact that every village is unique in its own way makes Zelda II feel alive. One village is normal, just a little worried about their surroundings. While another is completely deserted.

The design of the dungeons can grow quite tedious. Every dungeon has a different color, and that color never changes throughout the entire area. No life in the background, no miscellaneous objects to set one room from the other, nothing. While dungeons are an eye sore, the enemy placement is quite tedious as well. Fighting three of some of the strongest enemies in the game right before a boss room is inexcusable. Losing all of your lives results in game over and when resulting in game over you are sent to the beginning of the game where you have to travel once again to the area you must complete. That much is a relic of an era gone; modern players would just ask why they couldn’t start from the beginning of the temple. If we witness the game over screen anywhere other than a temple, sure this system makes sense, but anywhere else is a touch ridiculous. 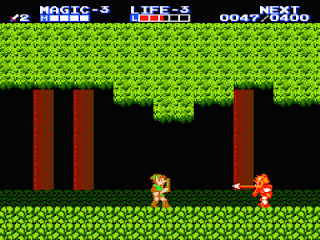 Thankfully none of that can be said about the boss battles. With one exception, every boss encounter in Zelda II is rewarding yet strategically difficult. The variety and the attention to detail in this aspect completely overshadow the original.

The score, however, is a different story. Hearing the same songs throughout the HUB, in battle, or in a temple, can really annoy someone. It’s a very limited soundtrack that grew to the point I turned the 3DS’ speaker all the way down for the sake of numbing my headache. Sure, there are a few classic tunes we can put a finger on but nothing stands out when it comes to Zelda II’s music.

As for the 3DS version; when you purchase Zelda II: The Adventure of Link off of the eShop, you’ll have one exclusive bonus to enjoy: save states. This review applies to both the NES and 3DS eShop versions and with that, if you’re playing this on your 3DS, save states will solve the spawning issue.

The unfair difficulty, lifeless temples and the repetitive soundtrack are easily overshadowed by the positives. Enjoyable challenges, rewarding gameplay and an awesome implementation of RPG elements make Zelda II: The Adventure of Link a must play for all fans.

Review: Injustice: Gods Among Us (iPhone)