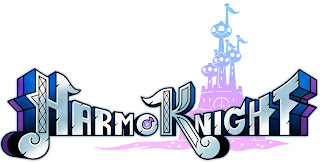 Game Freak has stepped outside of its massively popular Pokémon series and brought the unique rhythm platformer HarmoKnight to the 3DS eShop.

In our original HarmoKnight review our Editor-in-Chief, Matt Sainsbury, found quite a few things that he liked about the game, but ultimately felt that it was unworthy of the greatness that is expected from Game Freak. In this second opinion review, I wanted to offer another perspective of this unique title to our readers, because while I share many of the same issues with the tile, HarmoKnight’s charm has me excited to see what Game Freak will come up with next.

While the majority of Game Freak fans understandably envision the Pokémon franchise with the developer’s name, for me this isn’t so; I recall the oversized red Game Boy Advance cartridge that holds the drill-tastic platformer, Drill Dozer, in my mind instead. This is a game that I have cherished since the day I purchased it, which was right around its original release date and I’ve longed to see the developer try a new title outside if its staple Pokémon franchise for far too long now. Now that Game Freak employees are free to work on side titles under the developer’s namesake, HarmoKnight just might be the first of numerous unique titles of its ilk we will see going forward. While while my colleague doesn’t find this news particularly exciting, it is a long held wish come true for me and I’m quite overjoyed about it too. 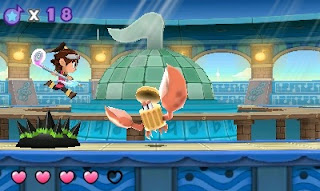 HarmoKnight is actually quite simple on the surface. The core gameplay is nothing more than a simple auto-runner that has you platforming through levels, instead of music tracks – jumping and hitting things to the beat. In true Nintendo form, it’s the characters and presentation that simply bleeds its charm right through the 3D screen. The game’s heroic protagonist, Tempo, features the cute and loveable Nintendo-esque design that instantly reminded me of another iconic mascot: Pit. Its bright colour palette, filled with playful pinks and greens makes it feel like Kirby is always floating just around the bend too. A great cast of characters take you on a witty music-filled journey in pursuit of one of the best new villains we’ve seen in sometime, to do what all of Nintendo’s main men do the best: rescue a beautiful damsel in distress, of course.
The main journey in HarmoKnight isn’t that long-lived, as its seven worlds – presented in an old-school overworld fashion – can be breezed through in about 2-4 hours, depending on skill. I found myself hardly being able to put the game down during this time though, because it always keeps things fresh. One level you’re jumping and hitting in the typical platforming levels and the next you might be racing down a mineshaft in a speeding mine cart with cymbals on the front of it to bash things out of your way and the next you’ll be face to face with one of the game’s huge bosses, all the while retaining the simple tap to the beat gameplay formula. Some of the more cinematic levels’ show-off outstanding 3D effects: robotic beast, giant laser balls and all sorts of other nasty things come rushing and jumping at you and some level’s pathways find the camera twisting its perspective around for added effect – this is one of the most impressive uses of the 3D effect we have seen on the console to date. 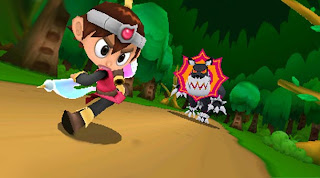 As a gamer with a higher skill level than the average,  I found the game’s precise note duration challenging and fun, but for the average (especially casual) gamers, the difficulty level here could possibly be too steep to see everything that is on offer. The main game is fairly easy to complete – with exception to the final boss – but it’s the additional content that I found myself enjoying the most. With a bit of exploration in some levels, an entire hidden world can be found that sky-rockets the difficulty level to new heights and there is even a handful of bonus levels that bring the loveable friends and music of Game Freaks’ Pokémon franchise into the world of HarmoKnight as well. I can easily see younger gamers getting frustrated trying to unlock, or even see this extra content.
The additional content does a great job to keep the game going after the main story is finished, but if you have the skills to earn a Gold Blossom on any level, you can go back and replay it in a faster mode, which ups the challenge even more. While this is a welcomed addition, without online leaderboards to compete against friends, this feature simply lacks the competitive edge that it needs. Many of the game’s music tracks, while bright and lively (and sometimes a bit rock and roll), don’t feature those catchy melodies that you will hum for hours on end after the game is turned off either. That’s not to say the soundtrack isn’t good, because it is and it most certainly gets the job done, it just isn’t quite as captivating as I hoped that it would be.
HarmoKnight comes to the 3DS eShop to offer something a bit different, which is exactly what I want to see from Nintendo on its downloadable services. Not only have I desired for more new IPs from Nintendo, I’ve wanted to see one specifically from Game Freak for a very long time. While HarmoKnight’s beats might be a bit too difficult to hit at times – keeping it away from the excellence that is Nintendo’s other eShop titles, Pushmo and Crashmo – it only follows a few notes behind them in my book.

Interview: The indies from New Zealand showing the world how microtransactions are done