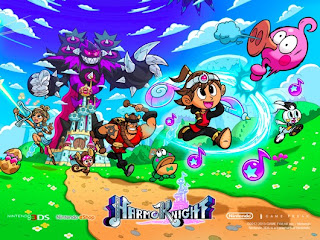 It’s difficult to understand what Game Freak was trying to do with HarmoKnight. Here is a company best known for Pokemon (in fact, that is entirely what the company is about) producing a casual-play rhythm game.

Was it just that Game Freak wanted to do something different to prove it shouldn’t be typecast as a children-friendly RPG builder? Perhaps, but if that is the case based on this game perhaps they should simply give in and revel in being the Pokemon guys. HarmoKnight is by no means a bad game, but by the same token this is not a game that will have anywhere near the impact or fan base that those pocket monsters have. Or in other words with this game Game Freak has gone from the very masters of the genre to being merely good at making fun games.

HarmoKnight is an rhythm game that is mixed in with endless runner mechanics. Players have no control over the auto-running knight beyond jumping and swinging an oversized music note in time to the music. It’s immediately aesthetically pleasing with bright, vibrant visuals and cutesy characters that could be home only in a Game Freak title, but there’s a bit of bite to this title; players will be graded based on how well they’ve done with that jumping and bopping. Being on time earns music notes (points), but getting those points is not necessarily an easy task. 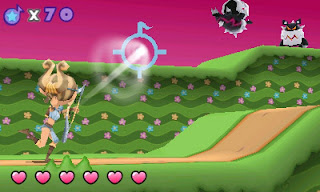 It’s not an overly difficult game to simply work through the levels towards the painfully short conclusion. This is a $20 eShop game and I was expecting a little more content than I got. Mastering each level (especially the impressive boss battles) and getting perfect runs is another manner entirely. In a way that struck me as reminiscent of the Rhythm Heaven series these games can be brutal on the slightest timing error, and I do suspect that players without a background in music will find the entire experience bordering on the frustrating at times.

What is most impressive about the game is its ability to keep varying things up despite being playable with just a few buttons. Within the first three game worlds, for instance, players will have acquired three different heroes, each with their own unique play style. They will have run through regular levels, boss battles and arena battles (very short levels with a lot of action). They will have even engaged in a spot of dancing-come-Simon-says with an octopus. From start to finish the game manages to keep throwing new quirks at the player, and it does a great job in sustaining interest right through to the game’s end. 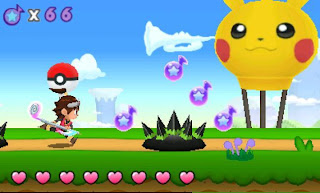 The game makes good use of the 3D effect to change perspective and throw new challenges at players. HarmoKnight, again like Rhythm Fever, finds ways to throw players challenges that force people to rely on their rhythm because their vision is simply too obstructed or otherwise thrown out to trust in sight. This is one of the few games I can’t imagine being as effective with that 3D slider off.

For all this variety it is ironic that given the game was likely an attempt to break away from Pokemon stereotypes, HarmoKnight shines at its best in the bonus stages, which use Pokemon’s music to construct the levels. The rest of the game features music that is charming enough, but not nearly as memorable as they need to be for a music game. Consider that Theatrhythm Final Fantasy is available quite cheaply now; that game features decades of musical history taken from some of the most popular soundtracks ever made. HarmoKnight might offer a different style of rhythm action to Theatrhythm, but it is still a rhythm game, and the music should really have been more memorable. 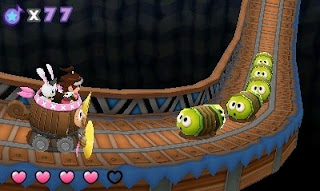 The 3DS eShop has had a very slow start to the year, with stuff like Splash or Crash demonstrating Nintendo has very little real idea how to push the service as an alternative to the App Store for portable gaming. HarmoKnight is a better attempt, but at its price it should be. On any other download service this would be considered a premium-price game and it doesn’t quite get there in terms of substance or quality. That’s not to suggest that this isn’t fun, because it is, but it is an utter waste of Game Freak’s considerable talents.

Interview: Big Paw Games on striking out fresh out of school