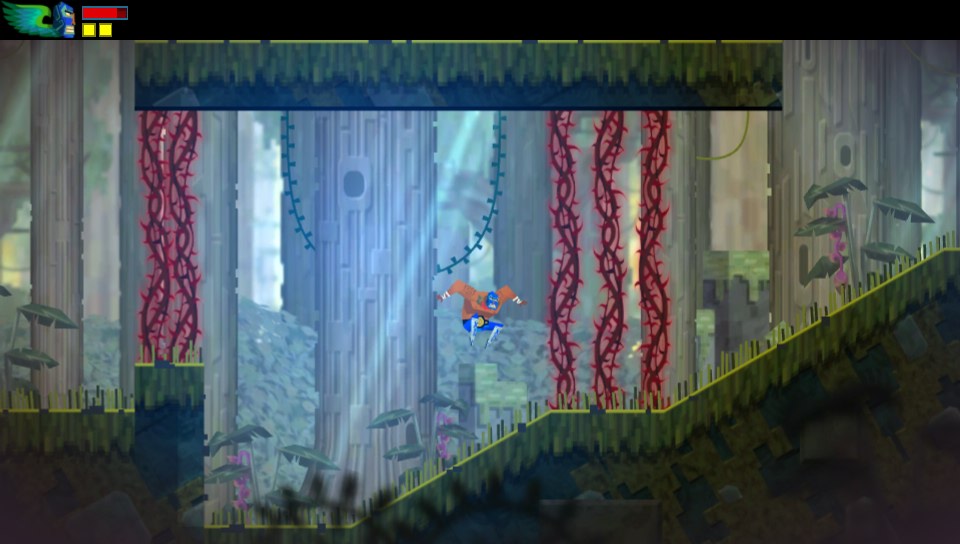 You could say that by mixing together a bunch of ingredients such as avocados, lime, onion, tomatoes and more you can get guacamole. DrinkBox studios took the same approach in mixing together the exploration and gradual power-gaining curve of a Metroid title, a swapping and platforming mechanic similar to Outland, enjoyable visuals and music and plenty of humor to create Guacamelee!

The story is ridiculous but amusing as Carlos Calaco has kidnapped the daughter of El Presidente to perform a ritual sacrifice to merge the worlds of the living and dead into one, so he can rule over both. You assume the role of Juan Aguacate, a normal guy who dons a magical mask and in doing so avoids death and gains the incredible powers of a Luchador.

If it sounds silly, it is – but there is a lot of humor throughout the game that works a lot more often than not. One poster in the background said: Tonight! The one and only El Link! – and the sign featured a rather suspiciously Link-dressed character holding a person/prize over his head with two hands. Whether it has a few subtle nods to common memes or signs calling out ‘Casa Crashers’ or just cheesy, tongue-in-cheek dialog, it is pretty clear that DrinkBox Studios was having fun while making this game.

Not all of the jokes are background sight gags either. One level has you running from left to right as a giant hybrid cat-like creature chases you down, destroying plenty of terrain in its wake (reminiscent of a scene from Casa Crash- er… Castle Crashers). That scene culminates with you jumping on a golden axe-like switch that drops the floor out from under the creature as it plummets into a lava pit. Just in case the reference to Super Mario Bros. was not clear enough, the final dot is connected as your character moves to the screen on the right only to have one of your eventual opponents say: Sorry Luchador, but your princess is in another castle.

The presentation is helped by an unusual but excellent mix of music as you play along, with distinctive tones depending on if you are in the world of the living or the dead. The sound effects are generally put to good use as well. Sometimes you hear an enemy before your eyes focus on them due to being in the wrong plane of existence at the time, and those little hints can come in quite helpful. 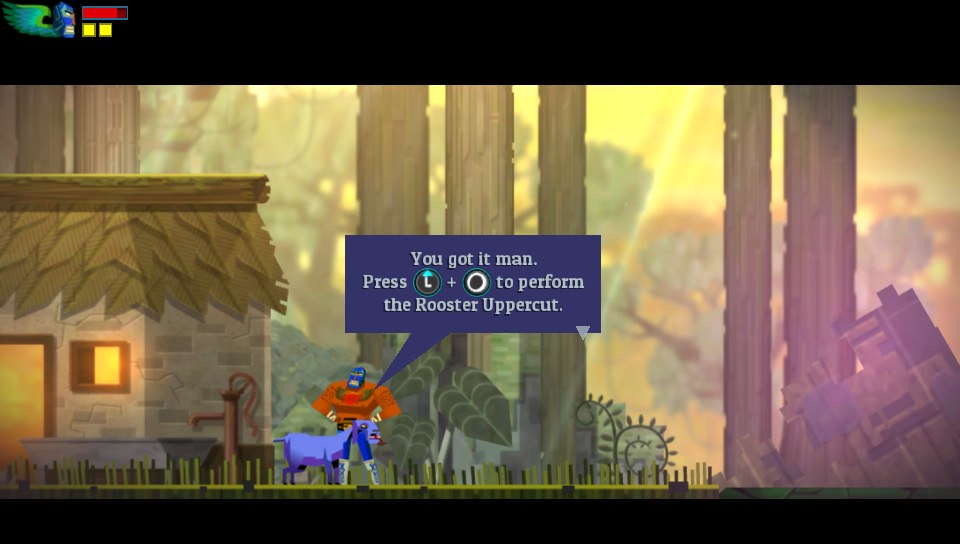 The visuals are bright and colorful, with a good deal of detail and smooth animations. Juan runs with a silly, exaggerated posture and starts off with a somewhat limited repertoire of moves, but over time learns plenty of new ones that are also equally over-the-top. Excellent use of parallax scrolling makes the environment seem more animated and lively than it really is. There is a somewhat limited amount of animation in the backgrounds, but because shadowed foreground environments and multiple layers of backgrounds move along the screen at different rates, there is a nice sense of depth and a deceptive sense of activity on the screen. The foreground items are used to sometimes cleverly hide treasure chests from plain sight as well, ensuring you pay close attention to your entire environment.

The gameplay however, is where everything could have fallen apart, but thankfully the opposite happens because it all comes together very nicely. You start off with the basics – move, duck, jump, roll and punch. Before long however, you learn moves such as uppercuts, headbutts, leaping attacks and more. Almost every new move has multiple purposes as well. Some enemies are shielded from damage unless you hit them with a specific move (like the uppercut, which removes a red shield from around an enemy). The uppercut can also be used in normal combat – handy for hitting flying opponents or popping an enemy into the air. It can also destroy red blocks that inhibit your progress in that direction. They can also be chained onto the end of a job to give you just an extra nudge of height and distance.

The game itself is not incredibly long, it can be beaten in around five hours if you do not bother with the exploration, but there are good reasons to do so. You can earn coins to buy additional skills or improve your health and stamina totals and regeneration times. There are treasure chests all over the game, and while some are fairly easy to get, others require some clever chaining together of moves and good platforming skills. One example was I had to jump past two spiked objects, then use a sideways dash move in the air to squirt horizontally to the right, then make use of my ‘second jump’ while still in the air, and finished it off with a rising uppercut that barely landed me on the platform.

There are plentiful checkpoints and saves throughout the game, but the difficulty does ratchet up quite a bit during the later third or so of the game. I covered a lot of ground and actually thought I was going to beat the game pretty easily after cruising through the first couple of hours or so without hardly dying. Later in the game however, I was dying all of the time. Some of the boss fights can be challenging (as well they should be, but compared to the non-boss fights, they could feel rather cheap at times – especially the last guy), and some of the platforming really makes you think – while trying to stay sharp with your reflexes. 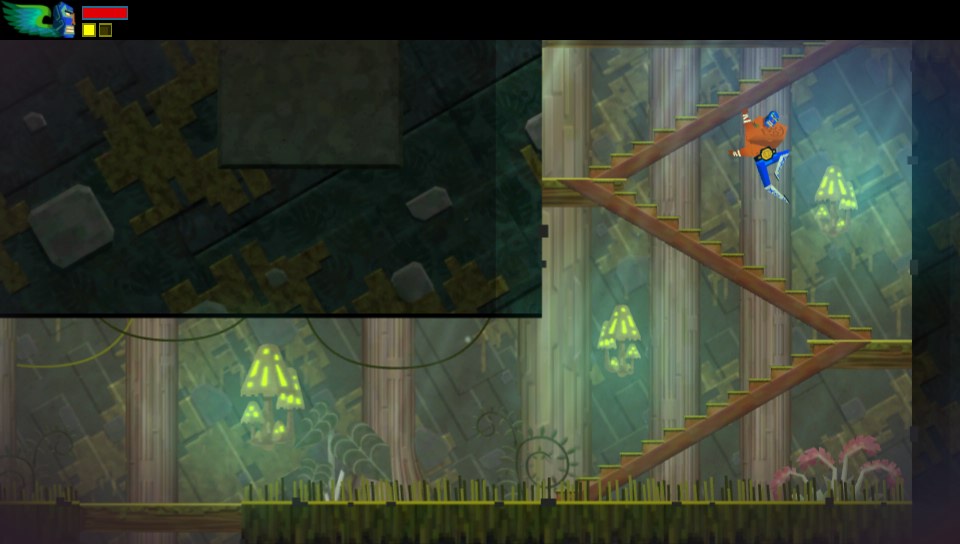 As an example, one of the powers you learn later in the game is the ability to switch between the world of the living and the dead with the press of a trigger button. In one plane walls might exist that do not in the other. You find yourself bouncing back and forth between these sets of walls, constantly juggling the act jumping and switching worlds at the same time several times in a row while attempting to reach your objective. It is undeniably clever use of the mechanics and doable, but I could see some players getting extremely frustrated as well (my son being among them), especially given that the spike in difficulty late in the game seems so out of tune with the earlier portion.

I had a chance to play Guacamelee! for both the PlayStation 3 and the Vita, and there is some excellent interplay between the two systems. You can cross save from PS3 to Vita and back again in a matter of seconds, and you can even use remote play on your Vita if for some reason you did not want to download and use the game’s proper Vita version. Guacamelee! also supports local co-op, and my son and I had a blast with it. You can access that by having a second controller, or by using the Vita as a second controller. My son played using both methods and said both felt basically the same, though there are a couple of differences in the controls when using a Vita.

The Vita version of Guacamelee! is an almost identical experience to its PS3 counterpart. The game, the visuals and the audio hold up beautifully (in fact I took my screenshots for this review right from my Vita gameplay). The only real difference is in the control scheme, which has to do a couple of things differently because of only having the two shoulder buttons instead of the four fond on a PlayStation controller.

Guacamelee! really caught me by surprise. I had seen a couple of the trailers (one down below if you would like to see it) and it look amusing, but I really did not know what to expect from it. DrinkBox Studios has created a great game though. It can be challenging, but the continual sense of progression mixed with distinctive presentation values and healthy helpings of humor prove to be a recipe for success.

Interview: Cary Walkin, the man who made an RPG in Microsoft Excel