Gran Turismo 6, a benchmarking defeat for OUYA, Gears and GoW fall flat and A Link to the Past gets a direct sequel in this week’s Brutal Gamer News Wrap.

Is it current gen or next gen for Gran Turismo 6
Gran Turismo 6 is no secret, in fact it’s been talked about for quite a while now. What hasn’t really been discussed is where it might be appearing, although it’s been widely expected that the just announced PS4 would be the game’s eventual home.

According to a slip up by internet storefront Newegg though, that might not be the case. The retailer listed (briefly) GT6 for the PS3 today before pulling said listed game as soon as they could. So what’s that mean? Well, the short answer is ‘nothing’, anthough it might be very telling indeed.

Could Gran Turismo 6 be a joint PS3/4 title? Might it be a digital only game for the PSN (doubtful)? Or might it be a PS3 only game (really doubtful)?

Take a look at the evidence right here.

OUYA out-powered… by a phone?

Not just a phone mind you, but still; the as of yet unreleased OUYA console was bested by several of the top Android smartphones on the market today recently in some benchmarking tests. Does this mean all that much to potential owners of the OUYA? Probably not as the micro-console was never meant to be any kind of competition for high end consoles in the first place, so the chances that folks who were jazzed about the little guy will be down on it because of this is pretty slim.

In the end, the OUYA is an open-source console where you can try before you buy – and it’ll only cost you $100 USD. That’s still pretty solid, even for tech that’s ‘a generation old’

Sales of flagship, console exclusive titles Gears of War: Judgement and God of War: Ascension were reportedly sitting comfortably at the ‘meh’ level last month as two of both Microsoft and Sony’s big time franchises failed to capture the public’s attention.

Especially when compared to the previous entries in both series, Judgement and Ascension didn’t exactly set the world on fire- though they didn’t really flop either. Judgement moved a little over 400k copies compared to Gears of Wars 3’s over 2 million sold while Ascension’s total for March came to around 360k compared with God of War III’s 1.1 million.

There’s no argument that both series’ saw a significant drop off. Personally, I think it’s because both games are prequels, which as far as I’m concerned are always less exciting than true sequels.

Ascend to this link and cast your own Judgement. 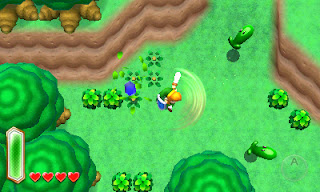 Nintendo presents, The Legend of Zelda.

The latest Nintendo Direct was the showcase for all kinds of cool stuff for Nintendo fans to look forward to, not the least of which are a trio of Zelda games for the 3DS.

Both ‘Oracle’ games (Oracle of Ages and Oracle of Seasons) will be making the jump to the 3DS’ Virtual Console by the end of next month. Pretty exciting is that both titles will also have their interactivity intact for the ports. So that means that playing one will unlock things in the other.

And while those two games aren’t new per say, the just announced direct sequel to the SNES classic A Link to the Past most definitely is. Details are super light, but the new title takes will launch for the handheld this Holiday season and is looking sharp in the demo video that’s up on the eShop right now.

That was far from all that Nintendo discussed at the Direct though (EarthBound anyone?)- and you can click here and here for the full story.

Interview: Fishlabs; proof that mobile game developers can be premium and successful