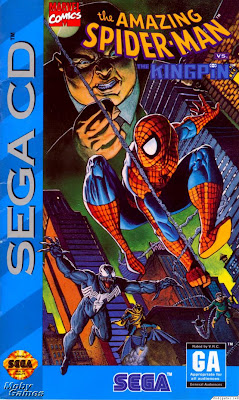 Everyone likes a top-10 list. They’re a bit of fun, and always good for discussion. And so each week we pull together a “top 10” list. These are here for fun and laughs – we’re not pretending that we’re the authority of good games taste in the world and this is purely the author’s preferences. Agree with him/ her or not, it’s all good. We’d love to hear your own personal preferences in the comments below the list. But please do be civil. We’re all friends here.
Comic books haven’t exactly had the best time of it when it comes to the world of video games have they? It wasn’t all that long ago that even mentioning that a game was licensed from a comic book (or a movie for that matter) would draw exasperated looks.
If you take a look back in time though, there are some truly great titles that have drawn (ahem) from comics and stood out in a landscape that’s littered with trash of the highest order (alas, poor Superman 64…). And then there’s the recent wave of games that have taken comic licenses and ran with them- producing some of the best games (period) in the last few years.
Personally, I’m a huge fan of the classic DC and Marvel universes and superhero fiction in general, so I’ve been in super-heaven (with a few exceptions) this past generation. And with that in mind, here’s my top ten- my personal favorite games featuring the four-colour crew.
10. The Amazing Spider-Man vs. The Kingpin (which is also known as just plain old Spider-Man) (Sega CD) – This little gem from way back in 1993 was actually an enhanced port of the Sega Genesis original. It was the first superhero game that really grabbed my attention and was a huge hit for Sega. Spidey fought a monstrous amount of his classic foes across NYC in side-scrolling style with all his trademark skills and powers in tow. If you can still find it, the Sega CD version is the one to get with loads of additional content including more Spidey villains, animated cut scenes and voice actors.
9. Mortal Kombat vs DC Universe (Xbox 360/PS3) – Not the best received game in the world, I nonetheless enjoyed MK vs DCU a great deal. As a big fan of the DC Universe in general though, I have to admit it might just be because I’m more than a little starved for games that feature DC heroes. MK vs DC did feature the classic Mortal Kombat fighting style, of which I’m a fan- it was just toned way down so nobody was impaling each other… too much. Still, it was a solid fighter that definitely had some great moments all its own. (and the ‘follow up’ Injustice looks promising) 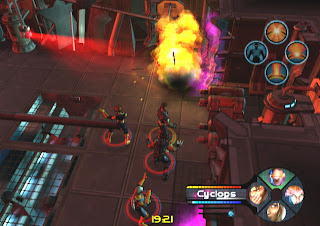 8. X-Men Legends (PS2/Xbox) – There has been no finer X-Men themed game in my opinion than the first X-Men Legends game. This one had it all; a solid ‘X-Men’ tale that had classic villains and heroes, excellent graphics and solid voice work and (most importantly for an X-Men anything) tons of characters. Now, in my mind you could actually make an argument for either Legends game; I just prefer the first over the Apocalypse-centered sequel. Both are excellent though.

7. Marvel vs Capcom 2 (Dreamcast) – Recently re-released on download services, MvC2 was the pinnacle of the Capcom ‘vs’ games as far as I’m concerned. I played this game for hours on end and never tired of taking on friends (couch multiplayer FTW!) and building teams of both the comic accurate and off the wall bizarro from the massive pool of characters that were available once they were all unlocked. Sure it’s Capcom fighting taken to the absurd level- but it’s awesome and has one of the best assemblages of Marvel (and Capcom) characters even seen on screen in one game. 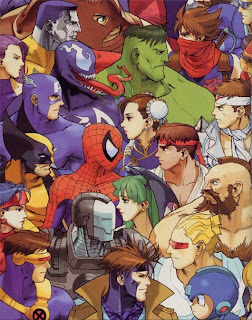 6. Batman Vengeance (PS2/Xbox) – Before Arkham, there was Vengeance. Based on Batman: The Animated Series, which is maybe the best version of the character to see a screen of any size, Batman Vengeance was a godsend for fans. The game had solid graphics and play control (with occasional hiccups) and absolutely fantastic voice acting with the actual voices from the fantastic show. It’s hands down one of my favorite ‘comic book’ games of all time, if for nothing else than the incredible attention to detail that Ubisoft put into it. It may not be in the same league as Rocksteady’s crown jewels, but it’s darned good stuff all the way through.

5. Marvel: Ultimate Alliance (Xbox 360/PS3) – Take X-Men Legends and crank it to fanboy maximum and you get M:UA. This one featured more playable Marvel heroes than you could ever comfortably play as in a sitting and loads of badguys to battle – all of them straight form the comics. Mixing and matching heroes into teams of four was an awesome experience and tackling villains as their heroic nemesis’ was pure joy for a longtime Marvelite like me. Much than with X-Men Legends, the sequel to Ultimate Alliance left a lot to be desired and felt like an unfinished game- the original though? Pure golden age.

4. Spider-Man (PSOne) – Spider-Man taking on the biggest cadre of his foes since the Sega CD title with real 3D web-swinging? Yes please. I have trouble remembering a PSOne title that I played through more than this one, and I have a feeling I would have continued playing if the PS2 hadn’t come along and distracted me. The controls are a dream, the story is very solid all the way though (except the post-credits scene) and the character cameos from other heroes is both amazing and spectacular. Just play it and I can almost guarantee you’ll agree. 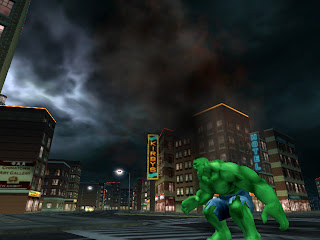 3. The Incredible Hulk: Ultimate Destruction (PS2/Xbox/GameCube) – HULK SMASH!!! The Incredible Hulk: Ultimate Destruction holds the destination of being pretty much the only game to both feature the Hulk and be good. Actually, that’s an incorrect statement- H:UD wasn’t good, it was incredible. This open-world (sorta) smash-em-up basically cast the player into the Hulk’s world with the goal of smashing everything in sight. Throw in a story that actually felt like something you’d have read in a Hulk book at the time, some surprisingly good voice work, and tons of moves to smash with and you’ve got a classic comic book game from Radical

2. Batman: Arkham Asylum (Xbox 360/PS3) – Mature, well made, and visually stunning; Batman: Arkham Asylum stands head and shoulders as one of the best comic book titles of all time. The game featured voice actors from the classic Animated Series and legendary attention to detail that played like a love letter to Batman fans. Using the setting of Arkham Asylum for the criminally insane as a ‘cage’ of sorts for the Dark Knight was a stroke of genius and there is no better example of a comic book character brought into the video game world other than… 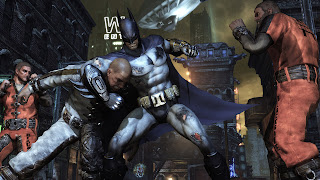 1. Batman: Arkham City (Xbox 360/PS3/Wii U) – I realise that it might be a little controversial to have the top two games on my list as Rocksteady’s first and second forays into Gotham City, but hey- it’s my list. Arkham City is nothing short of glorious and is like Arkham Asylum on steroids. The game places Bruce Wayne (not Batman) into the Mayor’s sprawling new prison and set him loose. Of course, it isn’t long before the hapless playboy suits up and commences with some copious butt-kickings. The graphics, much like Asylum, are excellent and the mix of Batman’s different skills works beyond well. Maybe the biggest reason that City shines over Asylum though is in the twisting story and the villain selection, which is even more impressive than the first. It also doesn’t hurt that Batman: Arkham City actually lets the Batman spread his wings and soar over Gotham too.

The weekly discussion: Game franchises you would like to see rise from the grave