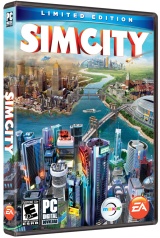 I have never really been a fan of always-on online DRM. When I heard rumors that it was going to be used on the next generation of PlayStation and Xbox, I groaned. To me, this was a bigger concern than if the consoles would play used games. I disliked it in Diablo III and Darksiders II. Video games have to manage a lot of things to be successful, and adding an extra element such as always-on connectivity seems like one more point of failure.

Now, I have not tried to play this version of SimCity, though I have been fond of prior iterations. I have a lot of gaming going on and SimCity despite all of its potential just did not make my cut this month. Maybe next month, or the month after I figured.

I have two coworkers in my department however, who purchased it day one. One had it pre-ordered weeks ago, having picked up some sort of a deluxe or collector’s edition that offering him what amounted to extra skins for his cities. I have not delved into the various editions because I knew I would not be a day one buyer. My coworker on the other hand could not wait to buy and play this. I asked him if he was even all that excited about this edition he bought – what his primary motivation was.

He just kind of grinned and shrugged. He admitted the extra skins/cities were probably silly and cosmetic, but he grew up a huge fan of the SimCity series and joked that he had waited ‘like a decade for the next one’ so he was more than happy to pick up this edition. He took a couple of days off from work so he could play this week.

Until he and my other coworker arrived today, I admit I knew nothing about the connectivity issues SimCity was going through. I have been under a collective rock of games such as Ni No Kuni, Fire Emblem and Naruto Powerful Shippuden and had more or less ignored the fact that SimCity and its always-on DRM was making a complete mess of things for people like my coworkers.

Listening to them both talk back and forth not about the features they liked best or what their favorite early memories of the game would be, but the fact that they could not get logged in. When either of them could, they suffered an unplayable experience. Basically, what looks like a great game is broken because Electronic Arts wanted to make sure they cut into piracy.

That is a worthy goal, believe me. However, this is one of those cases where I cannot help but wonder if the cure is worse than the illness. I think always-on DRM is a mistake. I have one friend who has an absolutely horrible, unreliable Internet provider because he lives way out of the city. Should he be punished because his cable company does not feel he is worth running lines out to?

I personally have only so-so Internet connectivity. I enjoyed Diablo III a great deal, but in the early days of playing it I experienced a handful of issues that really detracted from the experience. The thing is – I was not even interested in playing with other people. When I beat Diablo III, I did so solo from start to finish. So why in the world did my experience have to suffer from time to time due to questionable connectivity?

I have read that there are some multiplayer features built into the game, but both of my coworkers said they only were trying to make use of the single player experience. Already a patch to disable some of the features has been pushed in an attempt to make the experience better, I read. So I shot a text to the coworker who bought the enhanced edition and took some days off and asked if it was helping. His response? “Sort of. Not really.”

A game like this should be rewarding early adopters, not punishing them. That was what my coworker had said earlier – that he felt like he was being punished for wanting to play the game before it was ‘ready for prime time’. These are the players who should be rewarded for their loyalty, not made to feel like they are beta testers as the bugs of a high profile game get worked out.

Anyone else out there been struggling with the new SimCity release? Even if you are not, what are your thoughts on always-on DRM?

The weekly discussion: do you play as a guy, or a girl?