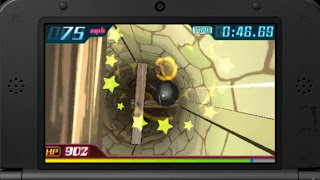 Poisoft must be over the moon. The little Japanese development studio was founded in 2008 and just five years later it’s become a partner for Nintendo. And not just that, it’s managed to do so by developing a mobile phone game – a genre Nintendo constantly criticises.

Splash or Crash is the kind of game that would be $0.99 on the App Store. Throw in 3D and apparently that makes it worth four times as much. Questions of value aside though, it’s not a bad little mobile game that has you maneuvering an object past obstacles as it hurtles down a virtual well towards a well of water at the bottom.

There’s the usual mobile incentives – the game has a leaderboard for fastest times to the bottom and there’s additional objects to unlock to throw down the well. And like a good mobile phone game there’s a nice, simple visual aesthetic. The speed of the game is not so great that it becomes hard to reach to new obstacles, but challenging enough that getting the really good times takes some practice. 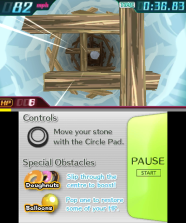 The game controls nicely too. There’s a bit of stickiness in the say the object moves around, which does take some time to get used to, but once you do so it’s easy to navigate through the space. Traps are laid out in a nicely challenging fashion, and though the game has limited content, the difficulty curve goes from reasonably easy to fairly challenging over the game’s course.

If you’re a perfectionist you’ll get a fair few hours out of Splash or Crash. If you’re happy just to finish levels it will be over far too quickly. But really, the only problem Splash or Crash has is that it is simply not appropriate as a 3DS eShop title.

It’s expensive for what it offers and does nothing to really enhance the eShop’s overall value. Anyone with an iPhone or Android device has access to literally hundreds of games of this standard, and rather than spending the time and resources to publish competition these kinds of games, Nintendo really should be looking for something a little more different.

– Matt S
Find me on MiiVerse: WaltzIT
Or on Twitter: @DigitallyDownld