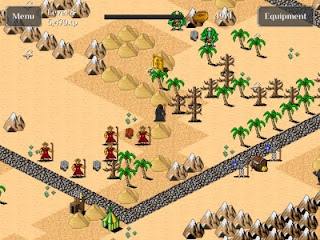 The term ‘roguelike’ gets used quite a bit. My son has even heard of and used it – though he does not know what it refers to. I actually sat down and explained to him what the game Rogue was. I was pretty young myself when that title came out and I did not play it for the first time until a few years later.

A handful of qualities are often associated with the roguelike genre such as unforgiving permadeath and randomly generated environments. They are generally dungeon crawling RPG titles, and the newly released Dungeon Plunder has all of these qualities – and a handful of others I did not expect.

Two things really stood out to me when I first started to play Dungeon Plunder. The first was the music, which was excellent. The other was the graphics, which are sparse and somewhat bland – but they get the job done. Everything on the map essentially covers a space. For some people that could prove annoying as everything you encounter is essentially the same size, from buildings to tents to enemies to mountains to your character. However, spatially it makes perfect sense and I did not have a problem with the scale. 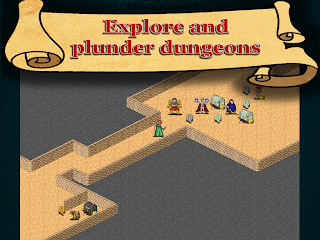 Maps themselves are large, and there is pretty good variety in the different landscapes and dungeons you will traverse. There is also a fairly wide variety of enemies, though those differences are mostly cosmetic as the only thing that really changes about them is their stats. Combat is handled basically the same regardless of your level or your opponent’s.

The core combat is handled through a slot machine mechanic. There is a lot of information to take in, but if you take the time to read what the various item matches do and pay attention to your screen after you spin, it becomes pretty apparent how the system is set up. When you start the game, you choose from one of three classes. Each one ties into the slot machine system a bit differently. For example, my first character was a warrior. He made great use of axes and shields, but three or four daggers did him no good. Those items are reserved for the rogue.

Some of the potential items are useful to every character, like life and gold. I have read a couple of other sites that said they did not understand the system, so I will break it down a bit. You and your opponent have hit points. In this example, I will use the warrior’s spins. If I get a staff or daggers, nothing happens. If I get two axes, I do some damage. If I get three or four axes, I do considerably more damage. If I get shields, they serve as sort of a second life bar. Damage dealt to me is done to my shield count first. When shields are depleted by my enemy’s attack role, then my hit points are what drop. Matching up gold coins gives you coins to spend at shops.

It sounds like this is all luck, but there is actually quite a fair amount of strategy involved once you familiarize yourself with the mechanics of the system. You spin twice. After your first spin, you choose which items you want to keep. You then spin again and those unselected items spin again. So for my warrior example, if on my first spin I see two axes, a poison and two daggers, I will keep the two axes and hope to get another one or two (or ideally three!) axes and deal out some heavy damage. 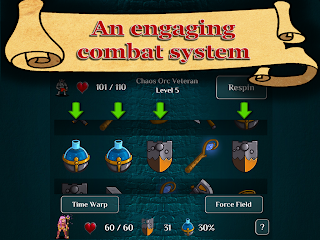 As you level up, you can put points into different fields such as your life points or defense. You also unlock new skills. The warrior was my favorite, so I will continue using him as my example here. One of his skills turns a non-shield into a shield. This is handy if you already have one or two shields on the board and want to be assured you will be able to raise your defense. Another one allows you to both deal and take more damage – which is very handy to apply if your first spin revealed two or three matching axes.

All three classes have different rules and make the combat a bit more fresh. I like the combat system – I think it is quite clever. It can be a bit repetitive after a time, but I enjoyed it enough to experiment with all classes. I would say it is worth trying them all, and you will have an ample chance to do so since in this game death actually does mean you are dead. Unlike a lot of roguelikes though, your efforts are not completely for naught.

Dungeon Plunder has a legacy system means that when your character dies, you pass along some bonuses to the next character you make. Just like I am personally not a fan of losing your characters for good in a strategy title like Fire Emblem, the loss of your character is one of my biggest annoyances in roguelike games. That means I really like this legacy system, as it still rewards you to some degree for your prior efforts and does not make you feel like you wasted a bunch of time.

The walking controls are a bit awkward at times. The isometric view does its job, and the touch and drag to move is functional, I just found it a tad clumsy at times when I was trying to navigate around impassible objects in the terrain. That and the graphics are hardly a deal killer, but both areas that could be perhaps refined in some way. There is also a good deal of repetition between the frequent deaths and the combat system. Overall though, Dungeon Plunder is good fun that gets more right than wrong.