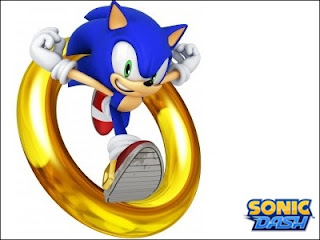 Have you ever played Sonic Unleashed, Sonic Colours, or Sonic Generations and thought the on-rails 3D sections ought to be made into a standalone game? That seems to be the inspiration for Hardlight’s Sonic Dash. The company has produced the perfect embodiment of the concept, going so far as adapting it to be an endless runner. It’s certainly a more fitting activity for the blue blur than jumping, but it’s not without its limitations either.

If you’re unversed in the gameplay of Sonic’s recent console outings, all you really need to know about Dash is that Sonic is locked down onto a track and set to keep speeding along.  The road scrolls on perpetually, so your only real goal here is to rack up a high score. This can be done in typical hedgehog fashion by collecting rings, busting robots, and collecting items. Crashing into just one obstacle will end Sonic’s session, though, so you need to be vigilant despite your need for speed. If you build up your meter by performing well, you’ll be rewarded with the option to send the game into autopilot temporarily as Sonic performs a boost.
Running through the same course would get repetitive fairly easily, so naturally there are some curveballs thrown in. Most of these come from established norms of Sonic’s platforming games such as springs that propel you to new areas and loop-de-loops to break up the pace. Occasionally you’ll be able to pull off tricks whilst suspended in mid-air like in the console games. 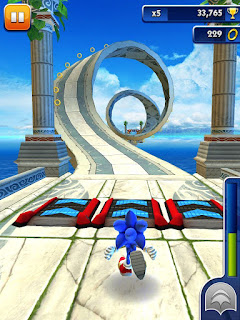 Looking at the game from the broader perspective of endless runners, it would be easy to bemoan Dash’s lack of depth. Indeed, you can experience most of what the game has to offer in just a few minutes. Still, the game does so many things right that it’s hard to complain too much. The sense of speed is certainly there, as is the general spirit of the series.
The touch controls are relatively successful in their decision not to emulate the shoulder buttons on a controller. The only real quibble is that the homing attack usage is insufficiently explained, forcing a few experimental runs before you can make any serious progress. The option for fully tap-based controls would have made things feel more authentic, but what’s here should suffice.
The package is rounded out with additional characters such as Tails, Knuckles, and Amy. Said animal friends will have to be unlocked by completing achievement-esque challenges and subsequently spending your bounty. Unfortunately, they take ages to unlock through legitimate play or cost $3.99-$6.99 USD a pop. That would be perfectly acceptable if they brought even the slightest gameplay changes with them, but all you really get is different animal’s backside to look at.
Speaking of which, there’s quite an emphasis on extraneous purchases. Several packages are available that provide more red rings and standard rings (essentially the game’s currency). Despite the initial game costing money, you’re greeted with purchase recommendations after every race. The most commonly touted one is the revive token, which allows Sonic to continue maintain his score and continue his marathon after being bested by an obstacle.
Of course, why you would want the dubious “honour” of using revive tokens to get a higher score than your friend is beyond me. This shatters any chance of a competitive leaderboard and instead confines the title to a fun little single player experience. There is certainly a place for microtransactions in gaming but they are so haphazardly implemented in Sonic Dash that you might start to believe otherwise. 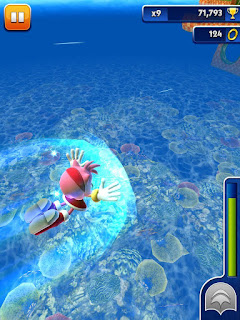 It’s not like the game doesn’t lend itself to paid content either. Having a variety of stages with different enemies and obstacles would make for notably more enthralling purchases. Hardlight’s other title, Sonic Jump, eventually brought extra courses and characters, but releasing Dash with just one course seems questionable.
Sonic Dash’s greatest asset may actually be its tremendous presentation. This is still one of the most visually remarkable games on the entire app store – cartoony source material be darned. Both the environments and character models are presented with a high degree of finesse. An uninformed onlooker might actually mistake this for Sonic’s latest main-series outing. If you have the option, you’ll want to get the iPad version just so you can appreciate the grandeur that much more than on a mobile-sized screen.
Sonic Dash is easily one of Sega’s most ambitious mobile outings. Regrettably, mediocre use of microtransactions and a lack of traversable environments bog down what is an otherwise enjoyable romp through Sonic’s world. It won’t set the genre ablaze, but fans of Sega’s mascot must still consider it.

– Clark A
Find me on MiiVerse: Midori