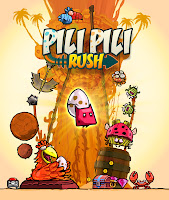 Sometimes a developer just gets it. Said developer takes both the advantages and the disadvantages of the platform it’s developing for and creates a virtual gaming experience that suits it. Tim and Snoof’s Pili Pili Rush shows that it’s a developer that understands what it is that we as gamers want to play on our iPhones whist on the go; giving us an addictively charming little iOS platformer that’s sure to brighten your day, whether you play it for an hour or only a few minutes with each play.
Reminiscent of Nintendo’s Game and Watch series, Pili Pili Rush comes to life on the small screen with its challenging platforming action on a single screen. While Nintendo’s early platformers didn’t features side scrolling levels like many of today’s platformers because of system limitations, retro fans today find that these games are still fun even today for some quick on the go action. This is primarily because of their ease of play and accessibility, as well as their addictive and challenging gameplay nature.
Pili Pili Rush practically nails each and every aspect that makes those fantastic titles we retro fans have so much adoration for. Its controls are simplified, with only left/right and jump buttons available onscreen, a great thing when you’re lacking actual physical buttons on the touchscreen. An addictive pick up and play gameplay style that finds you jumping around tricky platforming levels filled with switches, warp zones and respawning enemies in the hopes of collecting and returning eggs for your firebird friend. There’s a level of challenge here that offers something for both the casual and hardcore gamers out there. Not only are there two game modes: Normal and Spicy, but each game mode is packed with 60 levels for you hop through, each of them taking less than 60 seconds to complete – perfect for a game that fits in your pocket. Game Center leaderboards takes your total score from each mode, so maximizing your score on every single level is necessary to sit atop the leaderboards – bringing you back for more over and again. 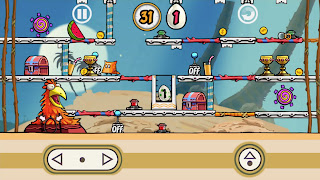 It’s Pili Pili Rush’s charm that’s so captivating though. Publisher, The Game Atelier, is known for its cutesy colourful aesthetics within its own games and Tim and Snoof’s title could easily be mistaken for one of its very own games. From the cute little pink devil you hop around the levels with to the vibrant colours used in the backdrops you’ll find as you progress throughout the game, the game’s atmosphere is upbeat and spirited. Oh, the soundtrack is absolutely infectious. I’ve only been playing the game for a few days now and I swear the game’s opening menu track is permanently ingrained into my skull – it literally won’t stop playing in my head!
Tim and Snoof’s Pili Pili Rush is a fine addition to the Game Atelier’s catalogue of published titles. It’s contagious soundtrack and vibrant visuals pack on the charm, while its tight and addictive platforming gameplay is perfectly suited to for those quick pick up and play sessions. Like a modern day Game and Watch title, Pili Pili Rush is certain to brighten your day. Now if you’ll excuse me, I’ve got some eggs in need of collecting.