A post-apocalyptic kart racer? Yeah, why not…

I was expecting a lot of things from PolarBit’s Cracking Sands the first time I fired it up on my iPad. Knowing nothing about the game other than that it was a combat racing title, I had of course certain thoughts right off the bat. Or actually, I should make that ‘before the pitch was even thrown’.

Combat racing has a few very well defined genre conventions after all. Gritty drivers, tough machines, crazy cars and weaponry flying everywhere. Other than the ‘crazy’ part though, oh how wrong I was.

For starters, it turns out that Cracking Sands is a kart racer- bet you didn’t see that one coming. There’s still combat to be sure, and it’s more violent than your traditional kart racer. There’s also a somewhat dark setting to the game, but it all has a lighthearted coat of paint on it- complete with goofy, super-deformed characters. It’s really hard not to laugh at the little guys when you see one up close.

Although it might be sounding a little too weird to work at this point, crossing Mario Kart with Twisted Metal actually turns out to be a pretty fun time in the end. Most of that has to do with the terrific controls that Cracking Sands boasts. Now it’s not all sunshine and roses, as there are some issues with some of the mechanics, but the actual racing is very well done here. Not to mention fun. 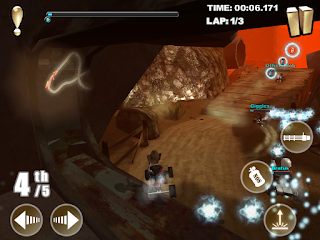 Speeding around the various tracks in the game is a simple task and that’s why it works. The absolute last thing you need is a complicated control scheme in a touch screen game of any kind and Cracking Sands understands this. As far as the steering goes, your kart automatically moves forward (so you don’t need to worry about a ‘gas’ button) and a set of left and right arrows sit in the left corner of the screen to steer.

You can play around a bit with this style of input, but I don’t recommend it. Tilt steering just feels wrong in the game and makes it unnecessarily hard to play. Just leave the buttons. Trust me.

So the driving is fun, but there’s more to Cracking Sands than just racing- this is a post-apocalyptic racer, remember? The weapons in the game, unfortunately, are a mixed bag. Most of the time they feel a little unnecessary and there really wasn’t as big an emphasis put on them that I thought there should be.

There’s a pretty nice selection of guns, cannons, gimmicky blasters and assorted whatnot that you can outfit your ride with, That’s not the problem. It’s just that I never really felt like they were all that useful. They also run low of ammo fairly quickly, and that doesn’t help. Weapons in the game never really run out of ammo completely though, they just get knocked down if you fire them steadily so that you can only blast out short bursts until you grab an energy pickup or run over a recharge pad as you race

There are two types of control setup for weapons and nitro (also in the game and way more useful than the guns). You can choose a stationary button set or a floating one. The floaters appear wherever you tap your right thumb down on the right side of the screen. This might sound nice, but it’s a really bad idea. Half the time I found the buttons I needed out of the spot where I thought they might be and sometimes they even went right off the screen. Much like the arrows for driving, just trust me and turn off the floating buttons. 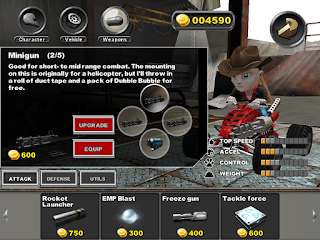 In addition to the weapons, you can also tweak both your vehicle and your driver. It’s pretty cool to see that level of management in a game like this and it’s also pretty cool to see the Mad Max inspired outfit (it’s the most expensive one) available at the in game shop.

Though the graphics are surprisingly good, the music and sound in Cracking Sands aren’t anything that’ll reach out and grab you in any way. I honestly didn’t even notice the sound effects when I played and the tunes are more than a little ‘meh’.

Like I mentioned above, I did like the visuals on PolarBit’s little racer though. It has a nice cartoony look while still keeping the setting very much in the forefront. Is it a strange mashup? Yeah it kind of is, but I liked it a lot. It’s kind of like lil’ Mad Max… which also really sounds like it could have been an ’80s cartoon now that I think about it.

As a fan of the classic Mad Max movies, I was mostly pleased as punch at the job PolarBit did here. Sure there are some rough edges and some of the play choices should have been either improved upon or left out of Cracking Sands completely, but I can’t in any way say I didn’t have fun with the game.

If you like kart racers, combat racing, or any combination of the two, you could seriously do a lot worse  than Cracking Sands. I’ve played a bunch of racers on iOS and this one is right up there in the fun department. Cracking Sands might not be the prettiest or have the most sharpened edges, but much like one of the cobbled together vehicles in the game- it’ll do the job and get you where you need to go.

Atelier Meruru gets her bikini on with Vita screenshots and trailer