The recently released sequel to the hit mobile game Temple Run just raced its way to a stunning amount of opening week downloads.

A simple game by anyone’s estimation, the original Temple Run nonetheless proved to be a hit with gamers. The ‘endless runner’ scored big netting a staggering 170 million downloads for iOS and Android. And as gaudy as those numbers are, its sequel is poised to blow the original away.

The recently released Temple Run 2 has, in its first week of release, been downloaded just over 50 million times. Let that sink in for a second. Fifty. Million.

“Temple Run has evolved into something so much bigger than us,” says Keith Shepherd, co-founder of (developer) Imangi. “The game has performed beyond our wildest dreams, and we are thrilled that gamers and fans have embraced Temple Run 2 in such a short period of time.” 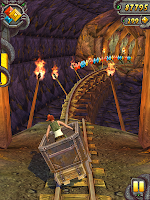 Now I’m sure that being a free download didn’t exactly hurt Temple Run 2’s download numbers, but still… 50 million downloads. Just how impressive is that? Extremely, considering that the game had zero pre-release hype and basically wasn’t even announced until it hit download services. By comparison, Rovio’s Angry Birds (which has become a veritable phenomenon) took just over a month to reach the same figure. Now that’s big.

Temple Run 2 now sits in the #1 spot on Google Play, the Amazon Marketplace, and iOS (Free) App Store- so you might as well go grab it and add yourself to the stat pile. Hmm… how soon do you think we’ll see a Star Wars crossover?

Frozen Synapse is Vita and PS3-bound