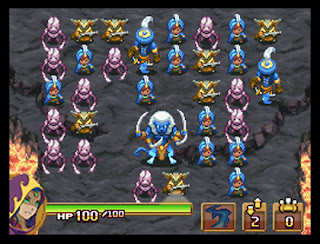 Originally a release on the Nintendo DS, Might and Magic: Clash of Heroes has made the high definition jump from consoles to iOS. It’s good, but the technical faults of this version mean it fails to recapture the charm that it originally had.

It’s not that Clash of Heroes is a bad game, far from it. The turn-based puzzle strategy sees players lining up three units arrayed on a grid in a turn-based match-3 style to attack the enemy and defend from enemy attacks. In the beginning the battles can be quite tame, with very few units on the field of battle. Later battles can get quite intense and need a lot of strategy to survive and win. It remains a great system, even if it has not changed from the original DS game.

Players can use three different units during battles. As players progress through the story, these units can be leveled up, increasing their attack power. Additionally, the units can be utilized in-battle to create a wall, which blocks enemy attacks. Then there are the special units, which generally take extra work to get going, but have some devastating effects when they do. 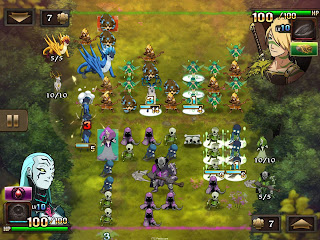 The main problem that the game faces is that the touchscreen does not work well in the game. Moving around the board is awkward. There’s no real sense of where to swipe or tap. There are many times where I moved units that I did not want to. The hassle is also found when you try to delete units. You have to tap and hold to be given the option to remove one of your units, but swiping left or right can still move the units that sit down at the bottom of the screen.

There’s also an issue with how the game is presented. During battles, the players units are on the bottom of the field and the enemies units are placed at the top. The DS version of the game used both screens, with the player and the enemy placed on one screen each. In other words there is plenty of space. Unfortunately, even when using a landscape orientation with the small screen of the iPhone will lead to even more touchscreen woes.

The visuals look the same as the HD versions of the game. Units and environments look really great on the retina display, and the animations are smooth. The detail in the avatars and the units are great touches, as are they when they attack. The music is a great complement to the fantasy battles, but I found most of the time I resorted back to what was in my iPod library. 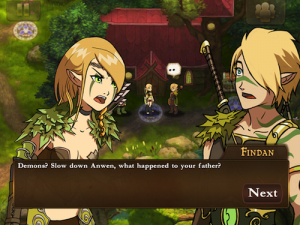 The iOS features bring some interesting online experiences. Online player is asynchronous, and players can have multiple games going at one time. It’s a perfect fit for Clash of Heroes and provides lots of gameplay following the completion of the main game. Pass and play is available as well for local multiplayer action.

Also, Apple’s Cloud allows for save files to be shared across your Apple ID, allowing for you to play back and forth between devices linked to your account. Unfortunately at the current time, I haven’t been able to load my Cloud saves from my iPad on my iPhone, but maybe that will change in an update.

Might and Magic: Clash of Heroes is still is a great strategy puzzle game. The problem is that it is not very well optimized for the touchscreens of the iPhone and the iPad. Hopefully the problems will be fixed in a future patch, but if you’re looking to pick this up, I would recommend you look at one of the other versions out there.

The Witcher 3 is coming to the PlayStation 4. Oh yes