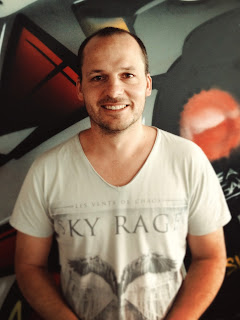 As Australia’s most prominent developer, and one of the largest working on the Apple iOS platforms, all eyes have been on Firemonkeys as it has geared up for the hotly-anticipated Real Racing 3.

And it has largely succeeded. Some issues with the microtranastion model aside, Real Racing 3 is a true triumph and AAA-quality iOS title. Firemonkeys Development Director, Kynan Woodman, is understandably busy as Real Racing 3 gears up for a global launch, but he took the time out to have a chat with Digitally Downloaded about the game, and how he sees iOS gaming evolving into the future.

The most interesting comment I found from this interview is regarding the “flight to the bottom” pricing. It seems like, for iOS developers, they’ve accepted that pricing for iOS games need to be either free-to-play or $0.99, and as everyone is now working at that price point, quality is again the point of differentiation.

That’s fine if you’re a big team like Firemonkeys, but it’s looking like the iOS market is quickly becoming more and more difficult for smaller teams to find a market.

(Be sure to read our review of Real Racing 3 here)

Digitally Downloaded (DD): How have you found the experience of developing this game?
Kynan Woodman (KW): It’s exciting to be working on a game that changes what people think mobile games can be.

DD: What have you done in Real Racing 3 to encourage fans of the previous two games to come back for more?
KW: We’ve added more content in Real Racing 3 than ever before, for the first time with officially licensed tracks on an incredible 22-car grid, and an extended lineup of over 46 meticulously detailed cars and nine licensed tracks. As well as bringing a new feature to multiplayer called Time Shifted Multiplayer (TSM), that lets you play your friends anywhere and anytime.

DD: There are some seriously good racers appearing on the app store now, from EA’s own Need for Speed to the freemium CSR Racing. What does Real Racing offer that puts it above these other games?
KW: Real Racing 3 has race modes such as cup, elimination and drag race where you can compete against your friends or players from around the world. This focus on giving the best genuine racing experience for free sets us apart.

DD: Real Racing 3 is part of a small, but growing, group of iOS games that could legitimately be called “AAA” quality. What challenges and opportunities has the iOS platform offered for big-budget development?
KW: The biggest challenge is creating a game that pushes the new hardware to its limits as each year brings faster and faster hardware. The size of the mobile market now makes it viable to create high production values games like Real Racing 3 that use all that power.

DD: Mobile gaming has often been accused of leading a “flight to the bottom” in terms of game prices. How can you manage working on such high quality games when mobile gamers are typically expecting free or $0.99 experiences?
KW: The price for mobile games has dropped over time as the size of the market has increased. As more and more games are $0.99 or free, you can no longer compete on price and quality becomes the key differentiator.

DD: Do you feel that physical buttons would help the iPad game experience? Would a hypothetical official Apple Controller allow you to enhance the experience of games on iPad?
KW: Our studio has a long history in mobile gaming, so we have spent many years making the best possible experience given the inputs on the device. The introduction of accelerometers was an amazing opportunity for tilt games and Real Racing is an example of how immersive it can be when done right. An interesting point to this is that the MacOS version of Real Racing 2 allows you to use your iPhone’s accelerometer to control it, and we have received lots of positive feedback about it.

DD: Firemonkeys is a large team now. Have you considered bringing Real Racing to additional platforms?
KW: Our studio is focusing on the release of Real Racing 3 on iOS and Android. If we see an opportunity on another platform we would always weigh up the pros and cons. We would only bring Real Racing to a new platform if it makes sense for the game and the studio.

DD: Apple is starting to experiment with other form factors – such as the larger iPhone 5 screen and the iPad Mini. Is optimising Real Racing 3 for these additional form factors causing any issues?
KW: Firemonkeys has been working on mobile devices for many years, and we have seen a staggering amount of change in device capabilities. Apple’s range of form factors is much smaller than we had to deal with in the past and our development process has been mindful of considering different device specs especially considering the number of devices we support on Android.

DD: How do you see the racing game genre evolving into the future?
KW: I believe it will continue to be about innovation and what makes a product unique. How we approached that is that we’ve got the most cars ever on one track in 22, and 46 cars available to drive on nine real-world tracks, an exciting new way to play multiplayer and graphics that really are moving people’s perceptions of what we can do with mobile.

DD: Finally, what games are you playing at the moment?
KW: Real Racing 3! I really am.