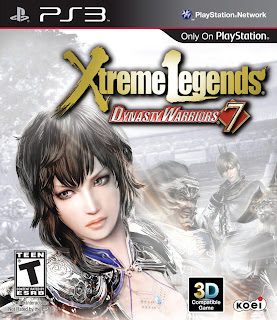 As a disclaimer, Digitally Downloaded is a Play-Asia affiliate, and we do gain some income from any games you purchase by clicking on the link below. It’s win-win for you and us, as you get games cheap, and we get to eat (we tend to get cranky and write bad reviews when we’re starving), so we thank you for your support. The affiliate arrangement in no way affects our editorial coverage.

So what’s on for this week?

The best of all modern Warriors games, on cheap

Dynasty Warriors 7 Xtreme Legends (PS3) – This was a game that was accused for being a mere glorified expansion pack to the excellent Dynasty Warriors 7 when it was released. I think that’s a little unfair; Warriors 7 Xtreme Legends has a mass of new levels and some great new systems to play through. Given that it now costs the same as an expansion pack, there’s no excuse not to pick it up anyway.

Rune Factory: Tides of Destiny (PS3) – As good as Harvest Moon is, you can’t help but feel that the RPG dungeon crawling that the Rune Factory series offers with the farming is an even more compelling formula. In HD this game looks really great, too.

Ninja Gaiden Sigma Plus (Vita) – One of the finest “hard” action games is ported expertly to the Vita in this game. Playing it on the go is worth the repurchase, even for Ninja Gaiden veterans.

Thank you again for your support, and enjoy the games! Just click on the image below to be taken to the Play-Asia website.

Interview: Why mobile is the future for Australian game development