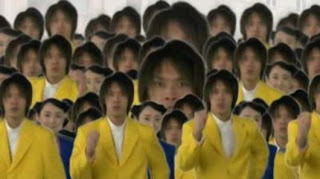 There is one thing I do not like about Japan. Perhaps it’s because I’m from Australia, which is a remarkably big country with a huge amount of space, and so there’s a nice sense of personal space here. Perhaps it’s because I grew up in the country which made it nice and easy to avoid crowds. I love Japan with a passion but boy do I hate lining up to do anything in that country.

So bless the Japanese for finding a sense of humour in queues. Or perhaps the guys that made Tokyo Crash Mobs had been driven insane by standing in so many queues. Either way, Tokyo Crash Mobs is an utterly insane game that, weirdly enough, makes sense in Japan. It’s a game that, not so subtly, pokes fun at just how frustrating lining up for mundane tasks is.

It’s just a pity that the game itself isn’t all that much fun. 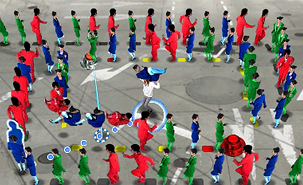 In basic terms Tokyo Crash Mobs is a clone of the kind of games that Popcap’s Zuma popularised. There is a row of objects (in this case people) that are coloured in a distinctive colour. In match-3 style players need to make these objects disappear by “shooting” additional coloured objects into the row so that three of the same colour are lined up. Those objects then disappear. Chain reactions can occur when a group of objects disappear and the gap left behind is bordered on either side by three objects of a different colour.

There’s a bit of strategy involved in maximising those combos, but the reason this was originally a Popcap megahit is because it’s a very accessible formula that almost anyone can get into. Because this game features some of the weirdest cut-scenes I’ve ever seen in a game, features real human actors (and very bad actors at that), and replaced the “objects” that in Zuma are pleasantly coloured balls with weirdly animated human figures, this games’ presentation makes it anything but accessible. In fact unless you’re the kind of person that can stomach the weirdest of Japanese games, I would avoid this one on presentation alone. It’s impossible to describe, but it’s insane enough that it’s off-putting. 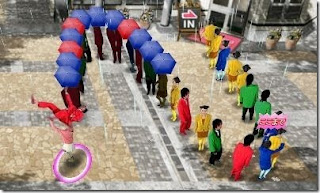 There are two different ways to play – one is to “roll” the humans into the row to make them disappear, and the other allows you to “shoot” them over the closest humans if there’s a better target behind. There’s also a handful of powerups to play with, and predictably those are weird things like massive exploding balls and UFOs. While some of this stuff is more complex than Popcap’s Zuma, it’s nothing that we haven’t seen in better examples of the genre before, such as Namco Bandai’s Duck Duck Quack! on the iPad.

In fact, there are some serious problems that hamper this game beyond just the too-weird presentation. The viewing angle of the play field is way, way too small for the pace in which the game moves. With Zuma and Duck Duck Quack, the skill in the game is in planning shots three or four “turns” in advance. That’s not possible with Crash Mobs, and instead you’ll be playing a reflex reaction game too much too often, and that’s just not as engaging.

There’s also a fraction of the content that should be in a game like this. No online leaderboards kills the replay value, and the “story” mode (which makes no sense whatsoever) is over in less than a hour.

So it’s an inferior game to the better games in the genre, even if it is more distinctive. I can’t rightly recommend Tokyo Crash Mobs, and that’s a pity because it comes to us from Mitchell, one of the better developers on the DSiWare platform. This is not a good start to its 3DS campaign.

Project X Zone will be coming to North America

Interview: Crysis 3 and the future of Crytek