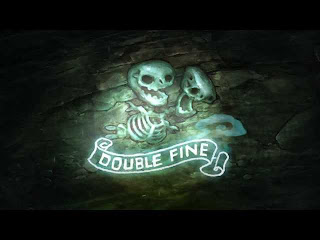 I can’t say I’m a huge fan of The Cave. Tim Schafer’s newest work is Tim Schafer through and through, and certainly in terms of presentation it’s a game that’s hard to argue with, but this is one of those rare times with Schafer where the gameplay doesn’t support the creativity in any meaningful way.

The Cave is an adventure game dressed up as a platformer. Players will take control of a team of three unique characters, each with their own special abilities and personalities. By working together to solve a range of puzzles, the team will slowly progress deeper and deeper into the cave network.

Two thinks about this game become obvious from the outset; this game has some twisted themes and it’s going to test the brain cells. Schafer is in many ways the Tim Burton of the games industry in that his creations are often a strange melding of childlike innocence and the Gothic. From a sarcastic sense of humour that is as interested in teasing players as making them laugh, to the weird twins that look like they belong in The Shining: The Game, and to the environments themselves which are always just alienating enough to be a cartoon kind of uncomfortable, The Cave is darkly delightful.

There are moments of real beauty too; even if it never quite approaches the visual fidelity of its close eShop rival, Trine 2. Entering into a new cave section and seeing a massive waterfall cascading in the background is just one example of how the game rewards progress – by constantly finding new ways to delight the player. 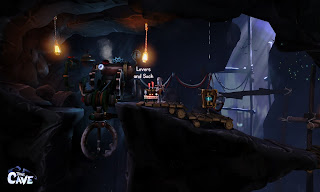 The puzzles are also quite engaging and will test the logical thinking of most players. The very first real obstacle in the game, for instance, requires players to use a crowbar to obtain a sprocket to repair a well to gain a bucket to stop water dripping onto a fusebox. Then you’ll need to get the fuse, use it to power a hotdog machine, and toss the hotdog onto a pit of spikes. Then you’ll need to ring a bell, which will summon a giant guard dog, which will go to eat the hotdog, and then you’ll need to drop a claw onto the dog to trap it and move it out of the way, allowing the team to safely pass.

Any of these puzzles could stump a player for hours if they so much as miss one piece in the process. It’s a relentlessly old-school approach to puzzling, and while this goes down well with some players, it must be said that it’s going to be frustrating for others. The internal logic within the game is consistent and that separates to inferior examples of the genre, such as Anna, but there are still going to be moments where you’ll be trying every possible combination of actions possible at random to try and hit the right trigger to progress the game on.

Coming from the guy that brought us Grim Fandango and the Monkey Island series, it’s not surprising to see Schafer continue to produce great work within his comfort zone. But then that is the precise problem with The Cave; after the incredible creativity of Stacking and Costume Quest, The Cave just feels a little too safe for its own good.

The weekend discussion: the most emotionally powerful games