There is one social game genre that I have actively avoided all these years – the Kingdom builder. These games have a long history – first played through browsers and then through the iPad and iPhone, and most people have experienced them at some stage.

Building up cities, gathering resources and then attacking or allying with nearby kingdoms sounds great in principle but in action it’s a massive time sink requiring constant attention. And, once you hit a certain level, the wait time to upgrade to the most powerful buildings is so long that you’ve got no real choice but to spend real money to hasten the process, or likely get slaughtered by your rivals while you wait.

So yes, I have avoided these games for years, and yet I have found myself finally playing one; Kingdom Conquest II. In almost every way this game is just like the others in the genre I have described above; building up my city and empire is a grind that requires me to check back every hour or two. The first thing I need to do each morning after I wake up is check in and issue a couple of commands. You would think that would be a sign that I need an intervention – I just hope this game wears off before it becomes a permanent habit. 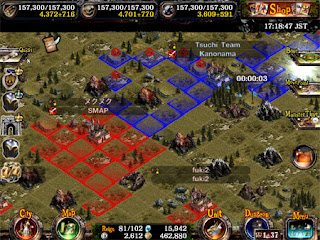 Like the best games of the genre Kingdom Conquest II is brutally addictive. In fact, this one might be even worse. My armies are populated by monsters than I earn as I would in a collectable card game (CCG). I need to spend the in-game currency that I labour to earn (thankfully I have resisted busting out the credit card so far) to acquire randomised monsters to form into units, led by commanders that cost a different kind of in-game currency. These monsters and units level-up as you would expect in an RPG and so I have got them constantly out and about fighting to get more powerful.

While they’re doing that I often find myself sending my hero into dungeons for the look to acquire more powerful monsters. Yes. Kingdom Conquest II features a dungeon delve mode that is reminiscent of a primitive MMO, complete with team raids and the like. It’s not enough to hold the game up by itself, but raids are over in just a few minutes, and boy are they addictive.

Hopefully this gives you the picture behind one of the most cruelly addictive games currently available out there. Kingdom Conquest II meshes together three genres I actually really enjoy (city-building simulation, action RPG and CCG/ strategy) and filters each experience down into a compulsive tapping of my iPad screen. There’s no deeper experience to be had by this game (though as with all in the genre, there’s a surprisingly intricate political system that works at the highest levels).

The question then is, now that I’m going with my little empire, how do I just stop?

Review: The Cave (Wii U)

Trailer: Can I just say, Injustice: Gods Among Us looks better and better