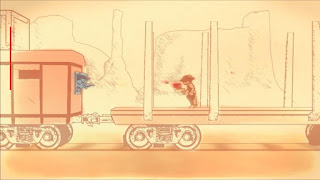 It’s not often that I find a platformer that I really get into. It’s simply not a genre that I get a kick from. So that in itself says a lot when I say I enjoyed Gunman Clive. It’s by no means the best example of the genre, but it is one of the cheapest games on the eShop, and it’s good value for that.

The most obvious feature of the game is its art style. Gunman Clive does a brilliant job with its minimalist, hand-drawn art style. Characters and enemies are mono colour, but the lack of detail here actually works for the game; it reeks indie charm. Coupled with a classy riff of traditional Western music themes and a nice but subtle use of 3D, and Gunman Clive is surprisingly one of the best looking games available on the eShop.

Backing that art style up is some very basic, but effective gameplay. Gunman Clive is a homage to many classic 2D platformers, and fans of every game from Mega Man to Super Mario Land will find some very familiar stuff to enjoy in this game. There’s even a homage to those silly airplane/ submarine sections from Super Mario Land in there. 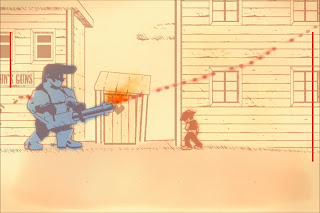 I must be mentioned that this game is very challenging – especially in the clever boss battles – but it was originally a mobile game, and this means there’s a couple of concessions that have been made. For all the game’s challenge, there’s precious few plat forming sections that require pixel perfect precision. The enemy’s attack patterns are generous in that they don’t require the kind of spectacular reflexes that genuine old platformers demand as enemies come from every angle. Gunman Clive is difficult for other reasons – intelligent placement of enemies and traps, as well as some clever ways to mix the basic gameplay up – low gravity and reversed gravity sequences towards the end area especially compelling.

It’s just as well that there is such a variety in the gameplay because the standard movement and shooting is tight without being especially exciting. The game moves at a fairly slow pace (although individual levels breeze by in just a minute or two) and enemies are both amusing and varied (aliens right through to killer ducks), but thanks to the art style, once you’ve seen each enemy design for the first time, it doesn’t take much longer for that charm to fade into the background.

Altogether the game will only last an hour, and diehards only have a ‘no damage’ run to give them the incentive to play through multiple times. It’s not much, but then this is a game that costs $2.50. For that price? Yes indeed this is a game worth supporting.

Review: Rise of the Guardians (Wii U)