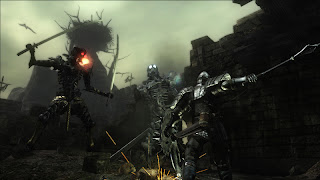 PlayStation 3 exclusive, Demon’s Souls, finally made its way to the PlayStation Network for download recently. Given that the sequel, Dark Souls, was the game that really launched the series popularity, the PSN release gave players the opportunity to play the lesser-known sibling for the first time and do a compare and contrast.

If you haven’t picked up Demon’s Souls yet, you should take the opportunity now because it is a vastly superior game to Dark Souls. That’s not to suggest that Dark Souls is a poor game, of course, it’s just that Demon’s Souls has a greater purity of vision. In other words, Demon’s Souls is darker (ironic, given the names of both games), crueler, and ultimately more rewarding.

Perhaps the most stand-out feature for me that elevates Demon’s Souls above its sequel is that Demon’s Souls actively discourages grinding. Dark Souls places convenient campfires throughout its world – often in places with plenty of respawnable enemies to kill over and over to power up for the tougher fights further on. Demon’s Souls forces players to backtrack significantly to the game’s “Nexus” to do the same thing, creating a lot of dull downtime every time a player wants to preserve the work they have done and recover from the enemies they have faced. 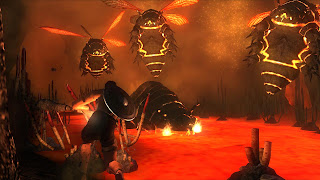 For those who haven’t played the game, the Nexus is a central “safe zone” that players can warp to from each of Demon’s Souls’ hostile environments from a few specific teleport points. The Nexus is the only place players can spend the souls (the in-game currency obtained by defeating enemies) to level-up their character. Just like with Dark Souls, dying in one of the game’s levels will make a player lose all of his or her souls, but because the teleport points are spaced so far apart at times, it’s not always an easy matter to jump out, level up and jump back in again.

This backtracking would be seen by some as a game design weakness compared to Dark Soul’s campfire system that keeps players in the heat of the action at all times. I disagree. Demon’s Souls subtly drives players forward (after all, who wants to dully backtrack?), and the tension of the game is higher because it encourages risky behaviour. Backtrack for ten minutes to cash in the souls you have collected, or risk taking on a boss under-levelled because you know if you beat him a portal to the game’s Nexus will be sitting there ready to be activated with no backtracking necessary? There’s a risk/ reward dynamic to Demon’s Souls that is far more prevalent than the relative safety of the campfire system of the Dark Souls games. 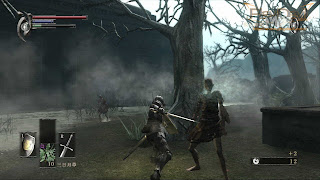 Less tangible is the comparatively thick atmosphere of Demon’s Souls. Dark Souls is, by comparison to the Demon’s Souls aesthetic, a happy Disney cartoon. The claustrophobia and heavy darkness that pervades every environment within Demon’s Souls is uncompromisingly bleak. It’s relentless, it’s stifling. It’s also not necessarily fun. To me, Dark Souls is a far more ‘casual play’ game – not because it is not as challenging (the actual combat side of things is balanced about the same in both games), but because I need to be in a far more committed mood to feel like playing Demon’s Souls, and it is harder to play for long sessions. Again, that is not because I am not enjoying it, but because after a few hours the atmosphere of Demon’s Souls makes a funeral seem comparatively entertaining. In Dark Souls there are moments of relief; a ray of sunlight breaking through the clouds over a breathtaking vista – free of enemies and other such threats. All that awaits around the corner in Demon’s Souls is an even darker corridor or an even more fetid swamp.

But Demon’s Souls is the more “pure” vision. It’s a game that makes no compromises and no apologies for what it is. As such, it’s a rare kind of game in the modern industry that even its successor has to defer to. Demon’s Souls might just be the greatest example of a visionary work to come from this generation of consoles.